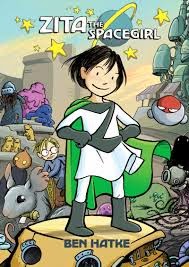 When Zita finds a strange device in a meteoroid and pushes the button on it her friend Joseph is pulled through the rift that opens.  She reacts as any young girl would, by running away and pretending nothing bad just happened.  Then she gathers her courage, pushes the button again, and jumps through the rift to go find her friend.  Her quest to rescue Joseph takes her to an alien planet that’s facing its final days.

Zita’s expression when her friend disappears and her subsequent attempt to run and hide reminded me of the times I did something bad as a kid and tried to make it go away by ignoring the problem.  But just as in real life, Zita’s forced to confront her error and make it right.

Zita’s a personable girl, with a lot of courage and heart.  She makes friends easily, finding several creatures willing to help her out.

The artwork is very expressive, giving the characters a lot of personality to match the dialogue.

The plot is quick moving, with a few twists.  Things wrap up well enough at the end of this comic, but there are 2 other books in the series, Legends of Zita the Spacegirl and Return of Zita the Spacegirl (which comes out in May).  The three books together make up the completed story arc.


This is a great kid friendly graphic novel that will inspire readers and hopefully encourage them to read more SF and fantasy adventures.

Email ThisBlogThis!Share to TwitterShare to FacebookShare to Pinterest
Posted by Jessica Strider at 11:25