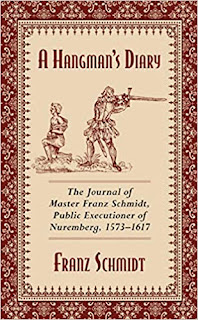 Translated by C. V. Calvert and A. W. Gruner

Edited and with an Introduction by Albrecht Keller and an essay “A Brief Account of Criminal Procedure in Germany in the Middle Ages”, by C. V. Calvert

This is a diary of the executioner of the city of Nuremberg in Germany. It begins with an essay by C. V. Calvert followed by a brief introduction to the diary itself. If you’re interested in medieval justice, the essay is invaluable, explaining the various people who worked at the prison, what a cell looked like, the various punishments meted out and for what crimes. The language used is occasionally archaic, for example the translator uses ‘incendiary’ where we would be more familiar with the term ‘arsonist’. The introduction goes over some information about the city of Nuremberg and the text itself.

The journal is edited, with occasional notes in brackets explaining that information has been cut (generally items in lists, for example with thieves, where 2 or 3 thefts are given details and others left out for space). There are also some notes referring the reader to other passages (when someone is let off and is later executed or if two people are accused and executed on different days).

The diary entries alternate between terse single lines, “A thief hanged” and long passages giving tantalizing details of the crimes for which people were punished. The diary is a bit frustrating in that you’re never given motivations for the crimes, and in some places I dearly wanted to know more of what went on.

On the whole it was a quick, interesting read.
Email ThisBlogThis!Share to TwitterShare to FacebookShare to Pinterest
Posted by Jessica Strider at 09:04 0 comments 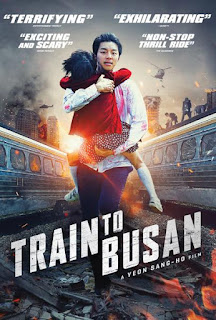 Passengers on a train from Seoul to Busan try to survive a zombie outbreak.

This is a fantastic horror movie. The acting is spot on with a good mixture of people you’re rooting for and a few you’re hoping die quickly. There’s very little introduction to the main group of initial survivors on the train, but among them are a pregnant woman, two older women, several high school baseball players, and a number of business men.

The film focuses on two principle characters: a father and daughter heading to Busan for the girl’s birthday. While he loves his daughter the father is a distant figure in her life, working long hours and hardly aware of what she’s up to. As the movie progresses, so does his relationship with his daughter and the world at large.

The cinematography is excellent. There’s a wonderful shot when the zombie first infect the train and people are starting to realize something is wrong when the camera zooms in on one zombie and then follows it in a close-up as it starts attacking people. With pulse pounding music it’s a terrifying scene, showing the chaos of infection and confusion.

The movie is hyper focused on the train but you do get occasional glimpses of what’s happening in the cities they pass, through news broadcasts, texts, phone calls and scenery as the train passes.

If you haven’t see this and enjoy zombie movies, I highly recommend it.
Email ThisBlogThis!Share to TwitterShare to FacebookShare to Pinterest
Posted by Jessica Strider at 10:29 0 comments

Book Review: Across the Green Grass Fields by Seanan McGuire 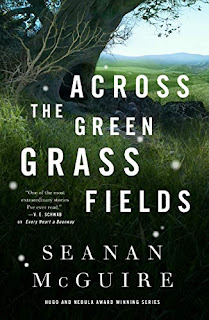 Ten year old Regan Lewis strives to be normal, so when she notices that puberty isn’t hitting her like the other girls she starts asking questions. Walking home from school after a rough day of bad choices, she finds a strange door and stumbles into another world, a world populated by various equine races. Her presence means their world needs saving, but Regan doesn’t believe in destiny, and doesn’t want to be a hero.

This is the 6th book in the Wayward Children series, but is a complete standalone novella. Regan has not been in any of the other books and the story is completely self-contained.

I loved Regan as a character and enjoyed seeing her start to question the world and her place in it. I thought the Hooflands were wonderful, with a well developed culture between the various hooved races (which includes centaurs, kelpies, satyrs and more).

While I’d have liked a longer epilogue showing some of the fallout of Regan’s adventure I understand why McGuire ended this novella where she did. It wraps up this particular story nicely, though I’m hopeful there’s a follow-up novella that continues Regan’s story.

The copy of the book I reviewed was an advance reader copy, so it didn’t have the illustrations by Rovina Cai. I’ve seen a few of them on the Tor.com website and they’re quite nice and I can imagine they help add to the fairytale quality of the story.

If you love horses and character development, this one’s for you.
Email ThisBlogThis!Share to TwitterShare to FacebookShare to Pinterest
Posted by Jessica Strider at 08:05 0 comments