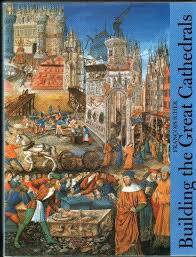 Pros: lots of large illustrations and photographs, goes over the entire process, easy to read

Cons: some extraneous information, refutes bad information by first teaching it to the reader

The book consists of six chapters: The Age of the Cathedrals; Patronage, Financing, and the Workshop Committee; The Architect; Before Reaching the Cathedral Construction-site; The Cathedral Construction-site; and The Memory of the Builders. I was hoping for a more in depth explanation of how cathedrals are built, from beginning to end. This turned out to be a very basic primer of the process. Turns out that’s all I really needed. There are over 200 colour photos, making this is a luscious book. It’s oversized so the photos are also quite large. There’s a good mix with a lot of building images and photos from various cathedrals.

The emphasis here is on French cathedrals and guilds, branching out briefly to touch on other places. I found it a bit annoying how the author kept refuting beliefs. Yes, it’s important to correct misconceptions but I’d prefer that be done by simply explaining the correct answer rather than taking up room to teach the bad information first. I also found the short chapter on whether a modern French confraternity descends from the medieval guilds unnecessary.

The last chapter includes information on a sketchbook that survives from the middle ages which reproduces many cathedral design elements. That was fantastic. I also appreciated the translations of some of the guild regulations for stonecutters.

This is a basic guide to the construction of cathedrals - from start to finish - whose illustrations really make it worth the price.
Email ThisBlogThis!Share to TwitterShare to FacebookShare to Pinterest
Posted by Jessica Strider at 09:59 0 comments 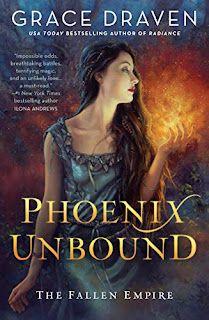 Cons: the world is brutal, begins with a rape

Gilene is the village of Beroe’s sacrifice for the Rites of Spring, and due to her ability to control fire, has been for the past few years. Her actions keep the other women in her village safe from harm but extract a severe price from her. When she’s recognized through her illusion spell by the Gladiator Prime Azarion, he blackmails her into helping him escape the coliseum and the Empire itself. As a fire witch, he needs her to reclaim his rightful place as heir to his clan.

This is a fantasy novel that follows the beats of a category romance novel. Despite it’s happily ever ending though, the world is brutal and the book itself begins by explaining that the heroine has been raped in the past as part of her duties as a sacrifice, while graphically showing the rape of the hero by the Empress, a scene I could have done without.

These actions set a tone for the book that I was never able to recover from. The author does a great job of showing how, over time, the couple begins to overcome their meeting (Azarion’s abduction and threatening of Gilene) to slowly kindle romantic feeling for each other. A fair amount of time passes over the course of the book, making this feel believable.

I really liked both Gilene and Azarion as characters. Gilene is responsible and pragmatic, even in the face of her imposed ‘duty’. The scene at the beginning where she disrobes, ready to be raped and done, is heartwrenching but really does show what a survivor she is. Azarion has lived through similar horrors and I was surprised that this was never used as a way to bring them closer together emotionally - that they never talked to each other (or other characters) as a way of dealing with and trying to heal from their traumas. I did like his determination and spirit and learning about his tribe was interesting.

Their rape is never formally addressed between them and thus hangs over everything they do. When they finally make love, Gilene thinks back to the last man she was with (ie, her previous rape). Not only is this off-putting to the reader it shows that she’s never really dealt with the trauma of the horrors she’s been through. Thinking back on this later, I wish the author had eased them into the physicality of sex as much as she’d eased them into their emotional connection. Yes, they share a bed and end up cuddling, but there’s no measure of, this is how sex with a willing partner differs from an unwilling, and I think the characters (and I as a reader) needed that. I also think it would have been interesting to see Azarion discuss how his only (only recent at any rate) experiences of sex were violent and filled with fear and anger, asking for advice on how to give (and feel) pleasure. I found it bizarre that the author would bring up such a heavy emotional event and then not try to show actual healing via therapy of some sort. Because as much as Gilene’s pragmatism makes her willing to undergo rape, that’s not the same as healing from it and being ready for an actual emotional and physical connection.

The world-building was very good. I liked that there are several types of magic and that some magics come with a cost. There are several interconnected political and economic groups (the Empire, various tribes, guilds, tradesmen). The Savatar were fleshed out as a people with a lot of customs setting them off from the Empire.

I loved that both characters get satisfying climaxes for their different plot arcs. The ending was great.

If you’re looking for a feel good, fluffy read, give this a pass. If you like grimdark fantasy but want more romance, this is for you.
Email ThisBlogThis!Share to TwitterShare to FacebookShare to Pinterest
Posted by Jessica Strider at 10:37 0 comments

I recently celebrated my anniversary and made a science fiction based card for my husband. My idea was this couple is dancing in front of the view screen/window of a spaceship flying past or orbiting another planet. It's the first card I've made in a while and I'm happy with how it turned out. You can't really see it in the photo but some of the darker planetary lines (clouds?) has some shimmery gold mixed in with the darker red. 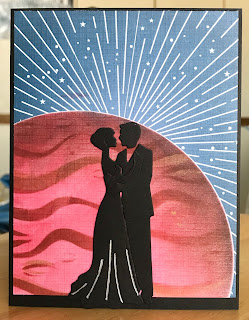 Email ThisBlogThis!Share to TwitterShare to FacebookShare to Pinterest
Posted by Jessica Strider at 10:33 0 comments

Book Review: History of the Church in Art by Rosa Giorgi

Pros: lots of images, covers a range of topics

Cons: no glossary for vestments

This is part of a series of books by the J. Paul Getty Museum where works of art (mostly paintings) have aspects highlighted to give a deeper appreciation of the artworks and their meanings. After the introduction there are 5 chapters in this book: Liturgical Objects and Furnishings; Clothes, Vestments, and Status; Worship and Images; Episodes in the History of the Western Church; and Historical Figures in the Roman Church Tradition.

This book is not a linear history of the Catholic Church. It is a guide to help you identify items of Catholic worship (clothing and implements) as well as important people and events in works of art.

I enjoyed learning about the various church implements, some of which I’ve learned to recognize and some of which I was unfamiliar with. This section was great as each implement was dealt with individually with at least one or two images.

I was hoping the section on vestments would go over each item of clothing so I could get a better understanding of what each one was. Instead the chapter dealt more with status, showing different orders (monks, priests, cardinals) and what they would wear. While there were some textual notes pointing out the various individual items of clothing (alb, cope, etc) it would have been nice to get a glossary of terms with simple images to better teach these terms.

The paintings used as examples were mostly from the later middle ages to the 1800s and covered a good mix of topics and people. I appreciated the number of explanatory notes each one received.

The chapters on historical episodes and figures covered a fair range of topics. There were a few I’d have added, but on the whole I thought they did a good job.

If you are interested in Christian art or the history of the Catholic church, this is a great book.
Email ThisBlogThis!Share to TwitterShare to FacebookShare to Pinterest
Posted by Jessica Strider at 11:26 0 comments 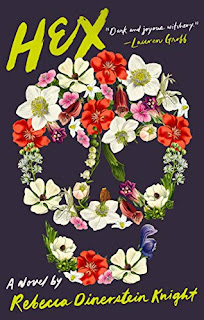 Nell Barber, an expelled PhD candidate in biological science, is exploring the fine line between poison and antidote, working alone to set a speed record for the detoxification of poisonous plants. Her mentor, Dr. Joan Kallas, is the hero of Nell's heart. Nell frequently finds herself standing in the doorway to Joan's office despite herself, mesmerized by Joan's elegance, success, and spiritual force.

Surrounded by Nell's ex, her best friend, her best friend's boyfriend, and Joan's buffoonish husband, the two scientists are tangled together at the center of a web of illicit relationships, grudges, and obsessions. All six are burdened by desire and ambition, and as they collide on the university campus, their attractions set in motion a domino effect of affairs and heartbreak.

Meanwhile, Nell slowly fills her empty apartment with poisonous plants to study, and she begins to keep a series of notebooks, all dedicated to Joan. She logs her research and how she spends her days, but the notebooks ultimately become a painstaking map of love. In a dazzling and unforgettable voice, Rebecca Dinerstein Knight has written a spellbinding novel of emotional and intellectual intensity.
Email ThisBlogThis!Share to TwitterShare to FacebookShare to Pinterest
Posted by Jessica Strider at 10:52 0 comments