Many thanks to the publisher and agent who sent me review copies this month.

Averee written by Stephanie Phillips with Dave Johnson, Illustrated by Marika Cresta - The politics of the past few years made me less inclined to read dystopian literature, but this graphic novel (and less stressful politics) means I'm ready to engage the subgenre again. Out April 20th. 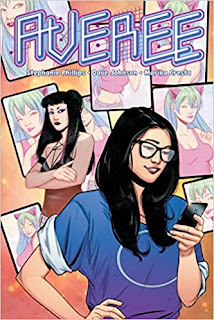 Averee is a typical high schooler living in the near future where social media status has real world consequences. The app, Ranked, determines everyone’s status, not just online, but in real life; who you can hang out with, what places you have access to, what schools you can get into, and what jobs you can get. And Pretty Kitty, the virtual pop star, is the spokesperson for it all, letting everyone know what products they should buy and hangout spots they should frequent in order to increase their rank.

Averee’s rank is just high enough for an enjoyable life. Unlike her best friend, Zoe, who has no rank, Averee is able to eat lunch where she chooses and to have a boyfriend of a high rank. That is, until one day when her rank mysteriously drops all the way down to Zoe’s level.

With nothing left to lose, Averee and Zoe hatch to kidnap Pretty Kitty and hold her ransom. They embark on a quest that takes them to the corporate underbelly of Ranked, and discover how the technology was originally developed with good intentions but was twisted in order to fuel corporate greed and control people’s lives.

They team up with the scientist who originally developed the app in order to expose the dangers of Ranked, and restore proper order and control over their own lives.

Among Thieves by M. J. Kuhn - The cover for this book is gorgeous and it sounds very interesting. Out in September. 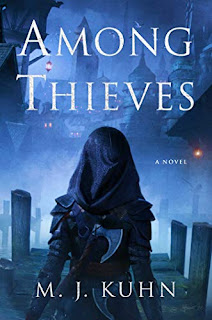 In just over a year’s time, Ryia Cautella has already earned herself a reputation as the quickest, deadliest blade in the dockside city of Carrowwick—not to mention the sharpest tongue. But Ryia Cautella is not her real name.

For the past six years, a deadly secret has kept her in hiding, running from town to town, doing whatever it takes to stay one step ahead of the formidable Guildmaster—the sovereign ruler of the five kingdoms of Thamorr. No matter how far or fast she travels, his servants never fail to track her down...but even the most powerful men can be defeated.

Ryia’s path now leads directly into the heart of the Guildmaster’s stronghold, and against every instinct she has, it’s not a path she can walk alone. Forced to team up with a crew of assorted miscreants, smugglers, and thieves, Ryia must plan her next moves very carefully. If she succeeds, her freedom is won once and for all…but unfortunately for Ryia, her new allies are nearly as selfish as she is, and they all have plans of their own.

Email ThisBlogThis!Share to TwitterShare to FacebookShare to Pinterest
Posted by Jessica Strider at 10:25 0 comments

Book Review: The Survival of Molly Southbourne by Tade Thompson 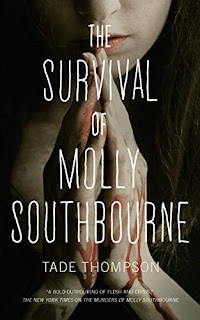 *NOTE: this review contains spoilers for book 1 of the series.*

Picking up immediately where The Murders of Molly Southbourne left off, the molly who survives the fire tries to find out who she is, and how she can live, a copy of the original. The memories and ghosts of Molly Prime and all the doppelgangers the prime killed, bring the surviving molly to the brink of madness. When a new enemy points to more answers about her origins she discovers there may be a better way of surviving.

A lot of time is spent in molly’s head, reliving her traumas and trying to overcome what her prime did. This causes her several psychotic breaks, which involve time in a mental hospital. I appreciated that molly realized her condition would probably require anti-psychotic medication for her to manage it properly. Some of the scenes involved may be disturbing to certain readers though.

Whenever I started to get annoyed with how molly was acting the story shifted gears and something new forced her to change. I liked seeing her develop over time, learning as she went and becoming an individual rather than an extension of Molly Prime.

Having said that, this is a horror novella, and there are several scenes of violence and descriptions of bodily fluids.

It touches on more of the mystery surrounding Molly’s origins, which was great. It was very interesting meeting another person with the same ‘condition’.

It’s a quick, interesting read.
Email ThisBlogThis!Share to TwitterShare to FacebookShare to Pinterest
Posted by Jessica Strider at 15:30 0 comments

Book Review: The Murders of Molly Southbourne by Tade Thompson 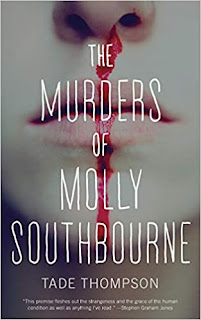 Every time Molly Southbourne bleeds, she creates doppelgangers that try to kill her.

The novella takes this fascinating premise and explains how Molly grew up, how her parents taught her to kill her doppelgangers, and how she survives into adulthood. It’s a weird and horrifying story that’s hard to look away from.

Molly goes through a series of emotional ups and downs as she grows, finally becoming mostly emotionless as an adult as the reality of constantly fighting herself takes its toll. The stages she goes through, of rebellion and trauma, fit her circumstances and make her compelling even if it’s hard to see yourself in her place.

The book is the perfect length to tell her story. There’s enough detail to give it weight and the ending is punchy. I’m curious where the sequel takes the story.
Email ThisBlogThis!Share to TwitterShare to FacebookShare to Pinterest
Posted by Jessica Strider at 10:08 0 comments 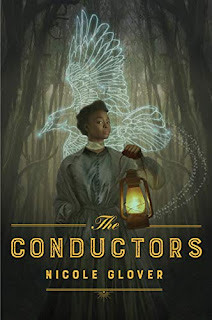 Hetty and Benjy Rhodes both escaped slavery in 1858. They became Conductors with the Underground Railway as a way of locating Hetty’s missing sister. Their motto: never leave people behind. With the war over, the pair solve crimes affecting the black community in Philidelphia that police ignore. When one of their friends turns up dead, the case becomes much more personal as they learn more about their friends - and each other.

The worldbuilding is fantastic. The setting is often gritty and harsh, especially the flashbacks. The author really captures the complexity of the world, with various laws, good and bad areas of town, economics and politics. I especially loved the friendship connections surround Hetty and Benjy. Community is hugely important in this book, and I loved seeing the variety of interactions and how Benjy and Hetty helped and were helped in turn by their friends.

There are three magic systems: sorcery using a wand, restricted to white practitioners; celestial magic, a mixture of practices from Africa, the West Indies, and Native Americans, which uses sigils for power; and alchemy or potion magic, created by brewing herbs. While you see less sorcery than the other two, I loved how magic was integrated into the world.

The pacing was great. So much is going on here and the setting and characters were so interesting that I never felt the book slow or drag.

It was fun reading about a couple who married for convenience. It’s great seeing a different kind of marital relationship and I loved seeing the couple’s interactions. They don’t always get along, but it was cool watching people in a strong marriage make up after fights and work together towards their goals.

This is a fantastic book. In many ways it reminds me of Jaime Lee Moyer’s Delia’s Shadow. If you like historical fantasy with great characters, fun magic systems, and an interesting mystery, pick this up.
Email ThisBlogThis!Share to TwitterShare to FacebookShare to Pinterest
Posted by Jessica Strider at 09:50 0 comments

Many thanks to Saga Press for sending me the following:

My Heart is a Chainsaw by Stephen Graham Jones - The Only Good Indians was quite terrifying, so I'm curious what Jones' next book has to offer. 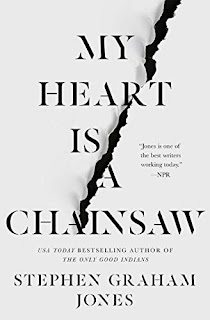 In her quickly gentrifying rural lake town Jade sees recent events only her encyclopedic knowledge of horror films could have prepared her for in this latest novel from the Jordan Peele of horror literature, Stephen Graham Jones.

Jade feels like she’s trapped in a slasher film as tourists go missing and the tension between her community and the celebrity newcomers to the Indian Lake shore heads towards a tipping point, when she feels the killer will rise. Jade watches as the small town she knows and loves begins to head towards catastrophe as yachts compete with canoes and the celebrity rich change the landscape of what was designated park lands to develop what they call Terra Nova.

This new novel from the acclaimed author of The Only Good Indians and “literary master” (Tananarive Due, author of The Good House) Stephen Graham Jones, is a must-read, exploring the changing landscape of the West through his particular voice of sharp humor and prophetic violence that will have you cheering for the American heroine we need.

Email ThisBlogThis!Share to TwitterShare to FacebookShare to Pinterest
Posted by Jessica Strider at 16:12 0 comments