Many thanks as always to the publishers who sent me books for review this past month.

The Mother Code by Carole Stivers - I have finished this and will post my review on its release date of May 5th August 25th. It has the unfortunate timing of being a book about a man made pandemic during an actual pandemic. Not my preferred reading right now, which coloured my impression of the book. 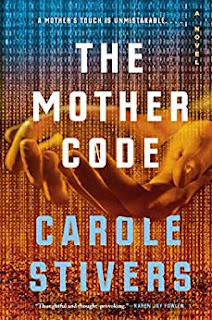 It’s 2049, and the survival of the human race is at risk. Earth’s inhabitants must turn to their last resort: a plan to place genetically engineered children inside the cocoons of large-scale robots—to be incubated, birthed, and raised by machines. But there is yet one hope of preserving the human order—an intelligence programmed into these machines that renders each unique in its own right—the Mother Code.

Kai is born in America's desert southwest, his only companion his robot Mother, Rho-Z. Equipped with the knowledge and motivations of a human mother, Rho-Z raises Kai and teaches him how to survive. But as children like Kai come of age, their Mothers transform too—in ways that were never predicted. When government survivors decide that the Mothers must be destroyed, Kai must make a choice. Will he break the bond he shares with Rho-Z? Or will he fight to save the only parent he has ever known?

In a future that could be our own, The Mother Code explores what truly makes us human—and the tenuous nature of the boundaries between us and the machines we create.


Axiom's End by Lindsay Ellis - Sounds interesting. This will be my next read. Out July 21st.

Truth is a human right. 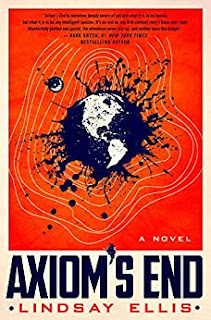 It’s fall 2007. A well-timed leak has revealed that the US government might have engaged in first contact. Cora Sabino is doing everything she can to avoid the whole mess, since the force driving the controversy is her whistleblower father. Even though Cora hasn’t spoken to him in years, his celebrity has caught the attention of the press, the Internet, the paparazzi, and the government—and with him in hiding, that attention is on her. She neither knows nor cares whether her father’s leaks are a hoax, and wants nothing to do with him—until she learns just how deeply entrenched her family is in the cover-up, and that an extraterrestrial presence has been on Earth for decades.

Realizing the extent to which both she and the public have been lied to, she sets out to gather as much information as she can, and finds that the best way for her to uncover the truth is not as a whistleblower, but as an intermediary. The alien presence has been completely uncommunicative until she convinces one of them that she can act as their interpreter, becoming the first and only human vessel of communication. Their otherworldly connection will change everything she thought she knew about being human—and could unleash a force more sinister than she ever imagined.

Email ThisBlogThis!Share to TwitterShare to FacebookShare to Pinterest
Posted by Jessica Strider at 10:08 1 comments

Book Review: The Invention of Race in the European Middle Ages by Geraldine Heng 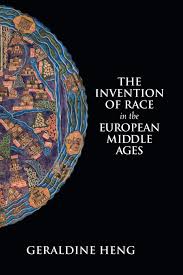 Cons: sometimes uses fictional narratives as if they were accurate historical works, didn’t properly clarify that Ethiopia does not mean the current country, repeats information

The book consists of 8 chapters: Beginnings, Inventions/Reinventions (race studies), State/Nation (Jews), War/Empire (Islamic “Saracens”), Color (Africans), World I (Native Americans as mentioned in the Vinland sagas), World II (Mongol Empire), World III (Romani). There is no conclusion but there are a lot of notes after each chapter.

The ‘Beginnings’ introductory chapter gives a brief overview of what each chapter covers. Chapter one deals with the idea that race is a modern construct and that racism as understood today didn’t exist in the Middle Ages. The author pulls that argument apart with a few quick examples of how Jews were treated in England (wearing a symbol on their clothes, accusations of blood/murder libel, the Jewish exchequer). She also quickly goes over the mappamundi that gained popularity in the 13th century, with their ‘monstrous races’ around the edges of the known European world and how the English wrote about the Irish, Welsh, and Scottish closer to home. She concludes this chapter with a quick example of race as it pertains to colour, specifically black Africans.

With the foundation set, the author moves to the heart of the matter starting with how the Jews were perceived in Medieval England specifically. The first two chapters were a struggle for me as the language was hard to parse, being very academic and dense. As the book progressed the language became more accessible and I found the rest of it easier going. The author repeated some information within chapters, which is great if you’re only reading one section but could get annoying at times when reading the whole thing.

I was impressed with the extent to which the author dissected her sources.

The author had the habit of giving very brief mention to things that should have been emphasized more. For example, in the chapter on black Africans there’s little reinforcing of the fact that “Ethiopia” referred to anywhere in Africa south of Egypt, and often included India (as goods from India traveled to Europe via ports in Africa). It would be easy to assume the term deals with the modern country. Similarly, while the same chapter uses fictional works to show the European attitudes towards black characters the author later uses other fictional narratives as if they were pure historic documents (while the Norse sagas might have a high level of accuracy, taking minutae written 200 years after the fact at face value is unwise).

There was a lot of great information imparted, and some interesting works broken down. I learned a lot from this book, especially on topics I have less background in. For example it was great that the author brought in archaeological information about Native American tribes that supported information from the Norse sagas. But there were times when had I not had the grounding on a certain topic (having read several books on ancient/medieval Ethiopia, taken a course in university on the challenges of using fictional primary sources for accurate historical information) I might have come away with the wrong conclusions.

This is a good book that discusses an important topic, but it’s not for beginners and should be read with care.
Email ThisBlogThis!Share to TwitterShare to FacebookShare to Pinterest
Posted by Jessica Strider at 10:18 0 comments 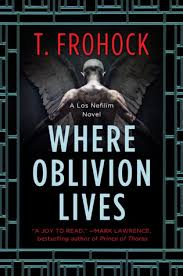 It is 1932 and tensions between Germany and France are on the rise. Diagos nightmares of the Great War and sharp violin music are getting worse and he fears los Nefilim will cast him out unless he can prove himself trustworthy. So when his lost violin case is discovered he offers to track down the instrument in Germany. But a past life connection implicates Guillermo’s half brother and a fallen angel.

I really enjoyed this. The plot is quick paced and engaging making the book hard to put down. Everything is focused on the plot, so while there is some groundwork being set for the next book in the series (with regards to the Spanish Civil War and World War II), most of what goes on is directly related to what’s happening at this period of time.

I love the characters and how they support each other. Even the scenes from one of the antagonist’s point of view showed that he has what he feels are noble motivations for his actions. Since Diago is gone for most of the book there isn’t as much family time, which is a shame as their personal dynamics are so wholesome and loving - and hard to find in media.

The alternate history additions of angels and daimons continues to be interesting. I love that the magic system is built around symbols and music.

I’m looking forward to the next book.
Email ThisBlogThis!Share to TwitterShare to FacebookShare to Pinterest
Posted by Jessica Strider at 10:01 0 comments 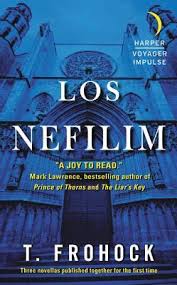 Several years ago Diago had a short "affair" with an angel, a betrayal he hid from his husband. Now another angel threatens to kill his husband if he doesn’t sacrifice the son he didn’t know existed to a daimon.

This is a collection of 3 novellas dealing with Diago, his husband Miquel, and his son, Rafael and how the Nephilim (offspring of humans and either angels or daimons) interact with each other. The stories take place within a short time frame.

I've put "affair" in quotation marks because as the story goes on it's revealed to be a rape. There are no graphic details but if this will trigger you you may want to avoid the book. I thought the author handeled it well, though the characters don't dwell on the emotional aftermath that would result from this revelation as much as I suspect real people would.

I liked the interactions between the three principle characters. The relationship between Diago and Miquel was so loving and considerate. Seeing Miquel caring for Rafael was very touching, especially given Rafael’s origin. There were some great family moments, especially with the later stories.

Each novella has a tight plot that gives you the necessary information and characters and little else.

I’d love to learn more about Diago’s past, his time with King Solomon in particular. Hopefully one of the novels the author has written as follow-ups will go into that period and fleshes out the world some more.

I enjoyed this and am looking forward to reading more in this world.
Email ThisBlogThis!Share to TwitterShare to FacebookShare to Pinterest
Posted by Jessica Strider at 14:11 0 comments