In the Hugo Award winning first book in the Neanderthal Parallax Trilogy, Robert J. Sawyer posits an alternate Earth where Neanderthals rose to sentience while our forebears went the way of the dodo. A modern day Neanderthal physicist, through a freak quantum accident, finds himself trapped in our world's Northern Ontario surrounded by strange, thin, hairless apes. As the two cultures learn to bridge their differences, the ramifications of this event is seen on both Earths. Sawyer manages to combine the qualities of "Planet of the Apes", Clan of the Cave Bear, "Stargate" and Perry Mason into an imaginative work of speculative fiction.

Lord of the Fading Lands
By: C. L. Wilson
If you enjoy the blend of romance and fantasy employed by LUNA books, then you will love this new book by Dorchester Publishing: Lord of the Fading Lands.
C.L. Wilson’s city of Celieria is impeccably detailed and populated with an interesting and yet wholly realistic cast of characters.
The Fey Truthspeaker is coming for her annual visit, and this year the Feyreisen, King of the Fey, is accompanying her. He is searching for the woman whom their oracle showed could save the dying tairen, magical winged cats, whose fates are intertwined with those of his people.
Little does he realize that this woman is his shei’tani, his soul-mate, and that she is already unwillingly betrothed to another. As if that weren’t enough, the Eld, mages and ancient enemy of the Fey, are plotting once more.
This debut will draw you into a magical weave of spirit and air that won’t release you until the last word is read.

Poltergeist
By: Kat Richardson
Harper Blaine was an ordinary small-time PI on a case that went wrong when she was killed. She was medically dead for two minutes and when medical technology brought her back, she discovered something different about herself: she was able to see the unseen and to walk within the veil separating the past from the present and the normal from the paranormal. It is a power she does not want, especially as it seems to attract all sorts of trouble, including her most recent case centering around a research group that has created an artificial poltergeist that seems to have a penchant for murder.
What can I say about the Greywalker novels? The covers are intriguing, and that alone was enough to get me to pick up the books. But what about the actual stories themselves?
With Greywalker, there was something about the book that kept drawing me back no matter how many times I put it down and went to something else. I decided to reserve judgment until I read a second book. Now a second book has come out, Poltergeist, and this time I read it from start to finish without going to something else. Kat Richardson is an author to keep an eye on. She gets better and better with each book.

Dreams of Inan: Stealing Life
By: Antony Johnston
If Nicco Salarum had been more careful during his bank heist he wouldn’t have gotten caught and thereby gone into debt to the local mob boss, Wallus Bazhanka, for getting him out of jail. He wouldn’t have gone further into debt by deciding to dump Bazhanka’s cargo rather than kill a man. And so he wouldn’t have taken the wizard Xandus’s job to steal Governor Werrdun of Hurrundan’s necklace of office during his visit to Azbantha. Which would have been good for Nicco. Because stealing the necklace is just the start of his troubles.
Dreams of Inan is a new series by Abaddon Books, where magic and technology are both highly developed though not equally or universally accepted.
A unique idea with a lot of potential, keep your eyes peeled for the next book in this series.

Violette Malan comes to the WBB. 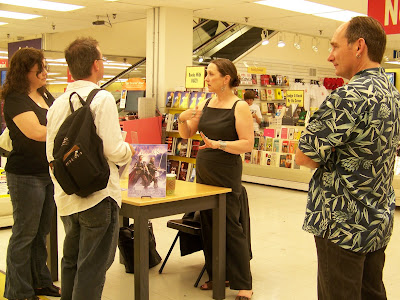 Violette Malan, author of fantasy novels Mirror Prince and Sleeping God was at the World's Biggest Bookstore on September 8th.

Email ThisBlogThis!Share to TwitterShare to FacebookShare to Pinterest
Posted by Jessica Strider at 11:30 0 comments

Sleeping God
By: Violette Malan
Rather than sitting the characters down for a history lesson they already know, Violette Malan introduces her world through the actions and personalities of her protagonists.
And the actions begin with a well orchestrated scape goating campaign by the New Believers, a sect of the Sleeping God's priesthood, against the Marked, those with special abilities to Heal, Find, Mend and See.
Enter Dhulyn Wolfshead, mercenary partner of Parno Lionsmane and a carefully hidden Seer. They have returned to Parno's homeland, where unknown to them, the priesthood is coming to greater power. Their job to escort Mar-eMar to the capital takes several unexpected turns involving kidnapping, assassination and mob violence.

***Meet Violette in store on Saturday September 8th at 2pm.***

Stardust
By: Neil Gaiman
Now that the movie is out, and the reviews are floating around, I thought it would be nice to remind people that Stardust was a BOOK first, and not the other way around.
Following the journey of young Tristran Thorn, on his quest to bring back a fallen star for the girl he loves, Neil Gaiman spins a gorgeous tale of faerie magic and moonlight. Although magical and romantic, Stardust is also very terrifying and cold, but in a rather mischievous manner.
Seventeen year old Tristran, raised in the city of Wall, embarks on an innocent journey into the woods, into the Faerie realm, to find the one thing that will bring him love - a fallen star. With some curious help, he finds the Star, not realizing that this star - this girl - would bring him more than his Heart's Desire. And he is not the only one looking for her. Tristran and the Star must face a unicorn, a witch-queen, an old merchant woman, an heir-to-the-throne and each other to find the greatest prize of all quests - true love.
Neil Gaiman's wonderful prose captivates the reader with mystery and imagery that evokes the fairy tales of old. Stardust is hard to put down, and leaves you wanting more.
NOW, go see the movie.
- Kat

The Blade Itself
By: Joe Abercrombie
My only problem with this novel was that instead of using profanity to enhance the emotion of specific scenes, it was used everywhere, spoiling the effect it would otherwise have had. It was hard to picture the Gandalf figure, Bayaz, First of the Magi, employing casual curses. Then again, I'd also be hard pressed to imagine Gandalf using magic while naked and dripping from an interrupted bath. But Abercrombie makes you imagine all sorts of strange, yet oddly compelling things.
This book is great if you want a more realistic view of 'barbarian' life meets civilization. Here are 'heroes' whose arrows sometimes miss and who get injured during swordfights, outnumbered or not.
And if its realistic fight scenes fail to catch your interest, the characters can't. The three protagonists from the beginning are less than likeable and yet you find yourself liking them anyway.
There's Logan Ninefingers, a Named Man, for his fearsome deeds of the past, come form the barbarian North. Glokta, a crippled inquisitor, who doesn't get any pleasure from torturing people because, after being tortured for two years himself, he no longer gets any pleasure from anything. And Jezal, proud officer in the king's army and unhappily training for this year's fencing competition.
Brought together by the tidings of war and through the machinations of Bayaz, this book will leave you asking for more.
- Jessica Strider

Eclipse
By Stephenie Meyer
Our favourite ensemble of characters is back for a reappearance in Stephenie Meyer's latest instalment of her vampire series, Eclipse.
Isabella: Graduation draws ever closer and putting on a gown and cap are not the only things that Isabella Swan looks forward to -she also looks forward to the fruition of the promise that was made to her- to be made into a vampire.
Edward: He knows he's being selfish, but he wants Isabella by his side for an eternity, not only as an immortal being, but also as his wife. But will dangling the promise of transforming her into a vampire himself be enough to make her say yes instead of no?
Jacob: A werewolf who wants Isabella to choose humanity­ to choose him instead of Edward. And he will do anything in his power to convince her, even at the cost of his life.
And in the midst of it all, a new threat is approaching, memorizing Isabella's scent and slowly gathering in for the kill.
If you have not read this series yet, all I can say is: Why not? Don't let the fact that it is a teen book put you off it. Good writing is good writing and likeable characters are people we want to find out more about. Read the series already! Why delay the inevitable?
-Mel

Email ThisBlogThis!Share to TwitterShare to FacebookShare to Pinterest
Posted by Jessica Strider at 09:34 0 comments 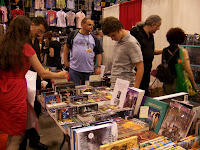 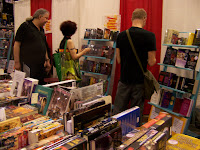 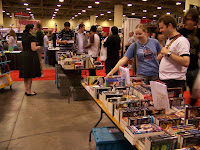 The World's Biggest Bookstore once again had a booth at this year's Fan Expo. We were in a much better location than last year with better stock, and so had a much busier show.
Email ThisBlogThis!Share to TwitterShare to FacebookShare to Pinterest
Posted by Jessica Strider at 09:33 0 comments