As per the other reading lists, this list is not complete, merely a jumping off point for further reading. The books are in no particular order (except for the two anthologies at the beginning).

As with the Time Travel reading list posted last month, this list is not meant to be comprehensive, simply to give more ideas of books to read if you liked a particular theme. In with the Vampire books I've thrown a few Werewolf stories. Other vampire books will show up on forthcoming lists. The books are listed here in no particular order.

“…Take care how you cut yourself. It is more dangerous than you think in this country.”
-Bram Stoker, Dracula 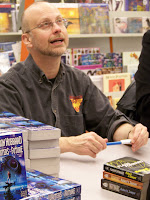 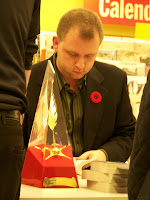 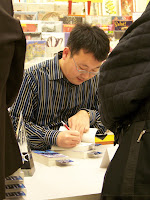 For anyone wishing to learn more about the international Writers of the Future Contest, check out their website.
Email ThisBlogThis!Share to TwitterShare to FacebookShare to Pinterest
Posted by Jessica Strider at 00:02 0 comments

Tuesday November 6th join us in store at 6pm as we host two of the winners of this year's L. Ron Hubbard Writer's of the Future Contest. Meet Grand Prize winner, Stephen Kotowych, for his short story 'Saturn in G Minor' and the 2nd Place winner, Tony Pi, for his novella 'The Stone Cipher'. Robert J. Sawyer, a judge of this year's contest and a prominent Canadian Science Fiction author will host the event.

Mankind has reached the stars, found fellow sentient life and lives in a utopia where sudden and violent death is unknown but for a handful of people known as Explorers. Explorers reach out to new worlds and in doing so are invariably killed by hostile terrain, plagued by unknown infections, or eaten by native lifeforms.

To keep the psychological strain these deaths have on the rest of society low, Explorers are unofficially picked from the outskirts of society: the handicapped, the deformed and the ugly.

Placed in this impossible situation, one Explorer does all she can to face up to the challenges and expectations.

Superb premise and a superb read.

The Hollow Chocolate Bunnies of the Apocalypse
By: Robert Rankin

Well, if you’re looking for a story that follows the standard fantasy formula, you may not want to pick up this book. The Hollow Chocolate Bunnies of the Apocalypse takes some of the stories that we grew up with and adds a twist that will leave you laughing and thinking that Robert Rankin is twisted. This is a story of mystery, love and control over Toy City.

Toy City is plagued with the murders of the rich and famous with no rhyme or reason. It is up to Eddie bear and a new comer to the city, Jack, to solve the cases and unravel the riddle of why this is happening. Their only clue is a hollow chocolate bunny left at the crime scenes. Meanwhile, Jack is trying to come to grips with the fact that the toys are alive and have their own city to live in, and you often wonder if Jack has a deeper and darker purpose to his presence in Toy City.

If you love a book with action, sex, crazy and in some cases literal murders, you have found the right book. But, whatever you do, don't read this book in a public place or you may get the crazy person look from everyone around you. Just remember that the truth about the murder victims comes to light in Chapter 4!

Told from the circling viewpoints of the three main characters, Elantris is a well written High Fantasy.

Prince Raoden wakes one morning to discover that he’s been damned by the curse that destroyed Elantris, once the golden city of the blessed, now a decaying mass outside the capital. Exiled to Elantris, Raoden begins to learn the magic once practiced there as he attempts to discover why Elantris fell.

Princess Sarene of Teod arrives to meet her betrothed, only to be told that Raoden is dead and she is legally his widow. She is immediately thrust into court intrigues of which she is ignorant.

Hrathen, high priest of Fjordell, has come to convert the people of Arelon. This is their last chance. If they don’t accept his teachings, the Fjord army will wipe them out.

Brought to a satisfying ending, Elantris is a story that will stay with you long after you’ve finished reading it.