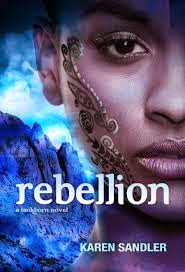 Cons: Kayla’s suspicious actions in her room would have brought attention to her schemes; rushed secondary romance

This is the third book in Sandler’s excellent Tankborn trilogy.  I will try to keep this review spoiler free, but there will be hints of plot that you may wish to avoid if you haven’t read the previous books.

This book picks up two months after the events of Awakening.  Kayla and Devak, separated by events, still long for each other.  The Kindred’s goals have shifted and the FHE’s mysterious - and deadly - goals are reaching fruition.

As with the previous books the world building is phenomenal.  I loved that we got to see more of the bhimkays (giant spiders).

In a few ways this book reminded me of Mockingjay, another YA novel that dealt with rebellion in a dystopian society.  As with that book, Rebellion shows that no sides in such conflicts have the welfare of the general population in mind.  In some ways Rebellion does a better job than Mockingjay, as it has dual protagonists, one at the bottom of society and one at the top.  And it’s interesting seeing how different strata of society respond to the bombings and breakdown of security.  The GENs (genetically engineered non-humans, the ’tankborns’ of the series name), slaves of the trueborns, always getting the worst of every situation, become angry, some wanting to fight but others only wanting freedom.  The high status trueborns meanwhile, try to maintain control, even when it makes things worse for themselves and the trueborns below them in status, with more and more restrictions and potential abuses of power.  Even Devak, in love with a GEN and actively working to change society discovers how difficult it is to erase years of social conditioning - both concerning his own status and how he reacts to the GENs around him, who don’t know him or how he’s helped their cause.

Sandler doesn’t pull any punches when it comes to examining race and social status in this book.  And it’s refreshing to see someone ask difficult questions.  There are no easy answers here - or in real life - and she shows that these issues are complex for everyone.  The GENs want freedom but the way FHE goes about achieving it makes life harder for those they’re ostensibly trying to help.  Meanwhile it’s easy to see how the trueborns, used to privilege and power, refuse to give those up.  And this includes the trueborns involved with both the Kindred and the FHE.  It’s easy to talk about equality for all, but it’s hard to realize it - for all sides.

I personally found the ending satisfying, with enough closure to make readers happy but with enough things about society still in flux to be believable given all that happened.

One thing about the book that I questioned was that Kayla and her roommate start talking over their internal communications systems to avoid the monitoring of their room.  I wondered why no one ever questioned what they were doing, sitting silently in their room.  Once or twice one of them responds aloud, an act I would have assumed would give them away.

These next two items didn’t bother me as much, but some aspects of Devak’s quest happened too coincidentally to be believable and Junjie’s relationship was too rushed, as the two barely knew each other.

Rebellion is a good conclusion to a great series that asks some tough questions while telling an interesting story.  If you haven’t picked these up yet, you’re really missing out.

Out April 25th.
Email ThisBlogThis!Share to TwitterShare to FacebookShare to Pinterest
Posted by Jessica Strider at 10:27