Book Review: Talus and the Frozen King by Graham Edwards 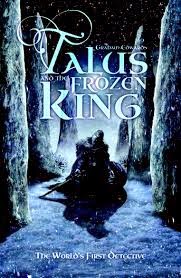 Talus, a widely travelled bard, and his companion, Bran, a former fisherman, arrive at a Northern island the day after their king has died.  A quick examination of the body reveals that the king was murdered, and Talus offers to help find the killer.

Talus is basically a neolithic age Sherlock Holmes.  He examines the evidence and observes the world closely to see what others miss.  And while he doesn’t use much in the way of scientific deduction, he is highly observant and has a personality that alternates between charming (when he’s telling a story) and abrasive (when he’s exhorting Bran to pay attention and see what’s happening around him).  Also like Sherlock, he’s not very good when it comes to relationship matters, and so tends to miss some of the human clues that crop up.

Which is where Bran comes in.  Bran is hot tempered and still grieving the loss of his wife and the use of his right hand, which was seriously injured the day she died.  He misses a lot of subtle clues but prompts Talus with regards to some of the more human elements of the case.

There are two strong women from the isles who have fairly prominent roles, while maintaining historical deference to the men around them.

The mystery is complex and while it takes a while for the more intricate details to come up, by the end of the book there’s quite a knot of intrigue to untangle.

This is historical fiction and the only fantasy style elements - if you can call them that - are the character’s beliefs in various gods and a judgement style afterlife.

My only complaint with the book is that the action takes place within a few days and the protagonists are constantly on the move.  Even after Bran exclaims his exhaustion he and Talus never seem to actually sleep, as they deal with one crisis after another.

The book is fairly slow moving, focusing as much on character as on the mystery.  If you like historical fiction and/or interesting mysteries, give this book a try.
Email ThisBlogThis!Share to TwitterShare to FacebookShare to Pinterest
Posted by Jessica Strider at 11:55