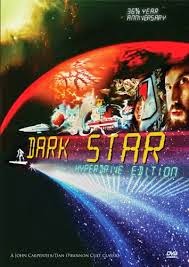 Things start to go disastrously wrong for the crew of a space ship, 20 years into its mission of locating and destroying planets with deteriorating orbits around potentially colonizable star systems.

I was wondering, as I turned on this film, what makes some movies classics and others forgettable.  Why have I seen Alien numerous times, but never heard of Dark Star until fairly recently?

Then I watched the film.  Ah, that’s why I’ve never heard of it.  It’s not very good.  Passing over the special effects, which would have been decent for their time, if cheesy for modern viewers, the movie itself is pretty bad.  The plot is thin, the dialogue insipid and boring, and the action often nonsensical.

According to IMDb it’s a comedy sci-fi film.  It might have helped had I known that going in.  I can see how a lot of the things that didn’t make sense might have been that way for comedic relief, but I wouldn’t say anything in the film struck me as particularly funny, aside from the smart bombs and Sargent Pinback’s diary entries.  There’s an alien that’s made up of a painted beach-ball with rubber hands.  To get to the airlock you have to crawl over a wooden plank across the elevator shaft (which became the location of 20 minutes of footage).  No one on the crew really talked to each other, which causes one of the major conflicts at the end of the film.  And the whole ship is covered in junk I doubt a real space mission crew would have brought on board.


I’m not sure if my impression of the film would have benefited knowing it wasn’t meant to be a serious film before hand, but it couldn’t have hurt.  I like a lot of John Carpenter’s other films and was expecting something more serious/horror.  If you decide to see this, go in with low expectations.

Email ThisBlogThis!Share to TwitterShare to FacebookShare to Pinterest
Posted by Jessica Strider at 12:38