Book Review: Journey Through the Afterlife: Ancient Egyptian Book of the Dead , edited by John Taylor 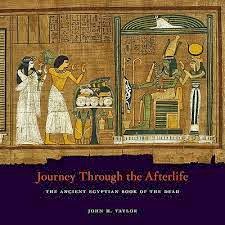 This is a gorgeous pictorial overview of what we call the Egyptian Book of the Dead and what the ancient Egyptians called The Book of Coming Forth by Day.  It evolved over time as a collection of knowledge and spells designed to help those for whom they were made, and with whom they were buried, find their way through the perils of the afterlife and judgement so they could ‘live’ again.

Journey Through the Afterlife takes examples from dozens of papyrus roles that have been recovered to discuss their purpose, the Egyptian view of death and the afterlife, burial practices and the act of preparing the rolls themselves.

Each chapter ends with several examples of what was discussed, often including supplementary information in their explanatory passages.

I was surprised by how many of the medieval views of magic (which I studied in university and elsewhere) started in Egypt.  For example: the belief that words have power, both when spoken and written.  The use of amulets.  The importance of knowing the true name of spirits/gods/demons in order to have power over them.  Making protective circles drawn with ‘wands’.  Using ‘virgin’ (unused) papyrus (in the middle ages it would have been unused parchment) for spells.  The importance of ritual in the efficacy of magic, etc.

It would have been nice had a translation of the full text of the Egyptian Book of the Dead been included, but as this book is intended as a companion guide to the texts, it’s not surprising they didn’t have room for it.

The is a beautiful and highly informative book if you have an interest in ancient Egypt, the Egyptian Book of the Dead, views of the afterlife or the ancient practice of magic.
Email ThisBlogThis!Share to TwitterShare to FacebookShare to Pinterest
Posted by Jessica Strider at 11:46

Labels: Ancient Egyptian, Book of Coming Forth by Day, Book of the Dead, Book Review, John Taylor, Journey Through the Afterlife