Stranger Than Fiction: The Germanic Tribes 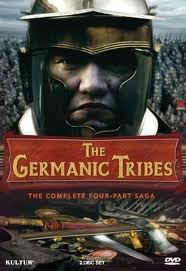 The four-part documentary brought out a lot of great information, showing how using a mixture of written records and archaeological evidence allows modern historians to extrapolate how the Germanic peoples lived two thousand years ago.  Each episode they created a fake person, someone who ‘might have lived’, to follow, as a narrative thread.  But I personally found the fake quotes that mingled with the historical ones distracting, as it was easy to forget that these characters weren’t based on actual recorded lives.

The documentary goes over the Roman conquest, the Germanic push back, a time of co-operation and the introduction of Christianity.

I know very little about this period of history, so this miniseries was full of interesting tidbits like:

- the Romans called the barbarian tribes and location, Germania, from which we get the name Germany
- just how far the West the Romans conquered
- Romans considered German tribesmen formidable warriors and good for bodyguards (as they didn’t care about Roman politics)
- people in Germania played lyres and followed some Roman religious beliefs
- Hadrian built a wall of wood and dirt through Germany to mark the end of Roman territory a few years before he built the stone wall in Northern England
- the Germanic tribes raided other tribes for slaves
- the Germanic tribes used Runic writing & worshiped the same gods as the Scandinavians
- gladiatorial fights were hosted in conquered regions of modern day Germany
- the origin of the Fleur de Lis symbol of France came from Medieval representations of Clovis (frogs on his garment, depicting his ‘evil pagan beliefs’ [the frog/toad is a symbol of lying] turn into lilies upon his baptism)


- Allemagne [the French word for Germany] comes from the Germanic tribe/confederation, the Alemanni (also spelled Alamanni and Alamani), who were conquered by the Frankish king Clovis. [According to wikipedia, the word ‘Alemanni’ meant ‘all men’, though only their enemies used it.  Those particular tribesmen called themselves Suebi. http://en.wikipedia.org/wiki/Allemanni  On reading about the various modern names for Germany and where they come from, the German name for Germany (Deutschland) comes from the Old High German word diutisc, which meant ‘of the people’ or ‘folk’] http://en.wikipedia.org/wiki/Names_of_Germany