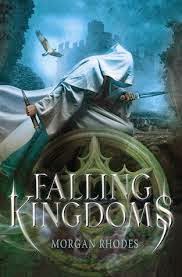 For Parents: some violence, off page sex

The lands of Mytica are slowly dying, their magic draining away.  Magnus, prince of Valoria, forced to cut himself off from his emotions in order to deal with his abusive father and distant mother, is very protective of the younger sister, Lucia, he loves too much.  But Lucia is more than he or she knows, heiress of a vast power she’s about to come into.

Cleo is the spoiled younger princess of Auranos.  On an excursion to the dying land of Palsia, known for their fine wine and nothing else, her friend, the arrogant Lord Aron Lagaris, kills a vintner’s son.  The victim’s brother, Jonas, swears vengeance.

War is coming to the 3 lands of Mytica.  And the actions of these teens is the spark that ignites it.

I wanted to like this book, I mean, I really did.  The cover is gorgeous and the plot sounds so interesting.

The good: The author had some great politics going on.  There’s a lot of intrigue among the three countries, and part of Palsia’s troubles are due to trade agreements made in the past that are only now causing major problems (deals very similar to ones made by African nations in the real world).

I loved Magnus.  His attempts to keep his emotions hidden even as he falls in love with his sister - the only person who shows him any kindness and consideration - is heartbreaking.  The author’s attempts to make him evil just made me pity him more.  I loved his entire storyline, and that of Lucia.

I found Jonas an interesting character.  Not quite as sympathetic as Magnus, despite the tragedy he experiences, his actions at least follow through from that action.  And while I’m not sure I believe what he does at the end of the book, again, his decision stems from what’s gone before.

The bad: I hated Cleo.  She’s got a few redeeming features, like she’s sorry the vintner’s son dies, but she’s selfish in her sorrow.  She does nothing to redress what happened, sends no funds to help the family afterwards or the land she knows is dying, even as hers flourishes.  She makes some truly, truly horrible decisions.  Decisions that someone her age, in her position, should never make.  Her older sister is dying for the dumbest reason, which ends up causing added problems for their kingdom.  I’ll explain more about these in the spoilers section.

Cleo never seemed to learn from her mistakes.  I could understand how certain things happened - life gets out of control sometimes, especially when you’re 16.  But things keep happening and she never seems to make better decisions.  At one point she believes that having a hissy fit will save her from one of her father’s decisions.  If that’s not entitlement, I don’t know what is.

My final point - the one that made me almost throw the book across the room in frustrated anger, deals with the ending, so it’s in the spoiler section below.

I wanted to like this book but didn’t.  I forced myself to finish and I’m not sure why.  It had a lot of promise, but too many of the characters rubbed me the wrong way and too many actions made no sense for me to continue with the series.

Jonas - at the end of the book he decides he’d rather help Cleo than see his country annexed by Limeros.  I can understand he doesn’t want the annexation to stand, but while Cleo explains earlier that she’s sorry his brother is dead she was still in a position to have saved him and didn’t.  And she does nothing to rectify the mistake.  So I can’t see him following her.

Cleo - her decision to search Palsia for magic seeds to save her sister is ridiculous.  She knows the country is experiencing unrest due to her actions and yet she goes there anyway, chasing a story that - if true - would have saved Palsia.  I also didn’t understand why the witch, when encountered, gave Cleo the seeds.  In her note the witch praises Cleo’s honesty - when Cleo told her nothing but lies.  Yes, Cleo did say the seeds were to save her sister, but that’s the only truth that came from her mouth beyond her name.  Seems to me the which could have been helping her own people rather than saving another spoiled princess.

And make no mistake, Emilia was a spoiled princess, despite her otherwise desire to subsume her needs for that of her kingdom.  She wasn’t, after all, sick.  She was dying of a broken heart.  She literally chose to die because the man she loved (who was at least 35 years older than her - he had a 20 year old son) accidentally died.

My last complaint deals with the siege / war at the end of the book.

OK, if you’re attacking a fortified castle complex you need more than 5000 men.  Especially if you’re not bringing any siege engines of any kind, ladders, sappers or anything else that might help you get past the walls.  Most sieges worked because they starved out the inhabitants.  In this book the ‘siege’ lasts - I kid you not - 3 days.  Yup, 3 days.  And the attacking army is running out of food, having no supply train set up to feed the peasant troops (the wealthier, armoured troops we’re told do have food).  For some reason the defending army decides to leave their fortifications and fight on the field.  Not sure why when they’ve got this wall behind which to throw things at the enemy.  The attacking fighters manage to breach the walls - without any siege weapons mentioned at all - after 12 hours of straight fighting, no breaks.  Not sure how that worked, as most battles lasted a few hours and than broke apart so people could rest and tend their wounded (or surrender/run away).  Not to mention, with only 5000 men, I’d have expected the fighting to end much earlier.