[Note: This competition is only open to US residents.] 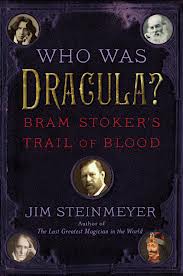 Tarcher/Penguin is pleased to announce the launch of the WHO WAS DRACULA? Fanfiction Competition to celebrate the much-anticipated new book from LA Times bestselling author, Jim Steinmeyer (THE LAST GREATEST MAGICIAN IN THE WORLD, CHARLES FORT). The winner of the competition will be rewarded with a 16 gig iPad mini and a signed copy of the book!

Steinmeyer’s work has been praised by the likes of author Neil Gaiman, who called Steinmeyer’s “combination of enthusiasm and erudition a joy,” to Teller (of Penn and Teller) who said he “writes about events a century ago as vividly as if he had been there.”

In the spirit of bringing new life to classic characters, Tarcher’s WHO WAS DRACULA? fanfiction competition will reward the best adaptation (fitting into the provided guidelines) of Dracula’s creation story with a 16GB iPad Mini and a signed hardcover copy of WHO WAS DRACULA? Bram Stoker’s Trail of Blood by Jim Steinmeyer.

There is no fee to enter, though reading the book is encouraged.


Check out their website for the full contest rules.

Labels: competition, fanfiction, Who Was Dracula?

I would love to join this competition :)