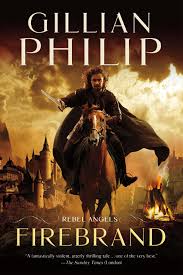 Cons: Kate's cruelty made her queenship hard to understand, worldbuilding had some gaps

Seth is an angry child, abandoned by his mother and ignored by his father.  Only his older half-brother, Conal, cared for him in his youth.  So when Conal is exiled to the mortal realms by Kate, the Sithe queen, Seth travels with him.  But life in the late 16th century is hard, especially when they're obvious targets for the witch craze.  This is the first part of Seth's tale.

I'm not a fan of character driven novels, but there are exceptions to every rule.  And boy, is this an exception.  Seth's angry youth and damaged pride grabbed my interest and never let it go.  This isn't an angsty story and Seth does grow up, but he only learns there are more things in the world that deserve his anger and that love brings its own kinds of pain.

As a narrator, Seth constantly alludes to future happenings, meaning that even when things are going well for him in the book - as rare as that is - it won't last.  Indeed, the tension caused by knowing things will get worse is partly why this book was so compelling.  It's also what makes the ending so forceful.

I was surprised that Kate, a queen who ruled by consent, was able to keep power considering as readers we only hear of the cruel things she does.  I found this a flaw in the worldbuiding, that we're so focused on Seth's family's dun (holding) that there's no sense of a larger world on their side of the veil.

It also took me longer than I'd care to admit to figure out that the Sithe switched terms with humans, calling themselves human beings, us the full-mortals and stories about us 'fairy stories'.  At first I thought the fairy story reference was an error.  This swapping of terms could have been made clearer, though Philip did do a great job of explaining other aspects of Sithe culture through realistic circumstances.  I loved the inclusion of truenames and water-horses, and the Lammyr were a creepy invention.  There was also a great conversation half way through the book between Seth and one of his lovers about some differences between Sithe and mortal customs with regards to women.  And I loved that the Sithe were an equal society, with no bias with regards to lovers, though also little love for offspring.

I don't always mention this but there are 2 rapes that occur in the book.  One is off stage and neither is described in any detail.  I appreciated the care given one of the characters with regards to healing and finding love despite the reality of the horrors of the world.

Ultimately it's a great book that's hard to put down, though it won't leave you feeling warm and fuzzy at the end.
Email ThisBlogThis!Share to TwitterShare to FacebookShare to Pinterest
Posted by Jessica Strider at 11:37