This film, available on Sundance Now (for, presumably, Americans, since it won't work for me) as well as other venues, has a very... unique premise.  I'd like to believe that humans aren't dumb enough to do this, but I suspect we are. 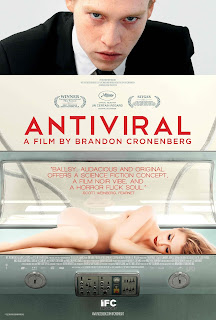 Syd March is an employee at a clinic that sells injections of live viruses harvested from sick celebrities to obsessed fans. Biological communion – for a price. Syd also supplies illegal samples of these viruses to piracy groups, smuggling them from the clinic in his own body. When he becomes infected with the disease that kills super sensation Hannah Geist, Syd becomes a target for collectors and rabid fans. He must unravel the mystery surrounding her death before he suffers the same fate.

Email ThisBlogThis!Share to TwitterShare to FacebookShare to Pinterest
Posted by Jessica Strider at 12:24