*  Note, this is a review for the second book in the series and as such contains spoilers for the previous book. 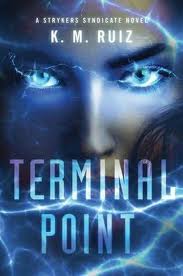 Cons: hard to believe just how much Lucas's group achieves with so little rest and time to heal from previous injuries

This is the second volume of the Stryker Syndicate duology that started with Mind Storm.  The action starts directly where Mind Storm ended, with Lucas and his group heading to the Arctic while their actions in Buffalo cause problems for the Strykers, the Warhounds and the World Court.  The World Court continues their preparations for leaving the Earth, even as Lucas undermines their efforts.

This is a quick moving book with a lot going on.  Lucas pushes his people on mission after mission, which, considering the amount of damage they take each mission gets a bit hard to believe.  On the other hand, it makes the psions less uber powerful, so the fights have more of a challenge to them.  Indeed, I really liked the fact that psions as powerful as Lucas and Jason had limits to their abilities.  I also liked how lower powered psions could link their abilities, making their enemies powerful as well, even though they're not as highly ranked.

There's non stop action in this book, with so many missions and so many plot threads that all come together in a final, climactic battle that no one, neither psions nor the humans around them, is left unscathed.

If you like post-apocalyptic societies and characters with super powers, you'll love this duology.