He's written and published several short stories and his debut novel is: 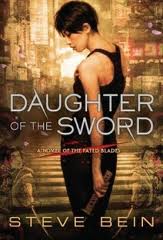 As the only female detective in Tokyo's most elite police unit, Mariko Oshiro has to fight for every ounce of respect, especially from her new boss. But when he gives her the least promising case possible—the attempted theft of an old samurai sword—it proves more dangerous than anyone on the force could have imagined.

The owner of the sword, Professor Yasuo Yamada, says it was crafted by the legendary Master Inazuma, a sword smith whose blades are rumored to have magical qualities. The man trying to steal it already owns another Inazuma—one whose deadly power eventually comes to control all who wield it.

Mariko's investigation has put her on a collision course with a curse centuries old and as bloodthirsty as ever. She is only the latest in a long line of warriors and soldiers to confront this power, and even the sword she learns to wield could turn against her.


Mr. Bein's book is pretty unique, but I found some comparison titles going a bit outside traditional SF/F channels.  So if you like his book you might enjoy some of the following.