Book Review: A Turn of Light by Julie Czerneda 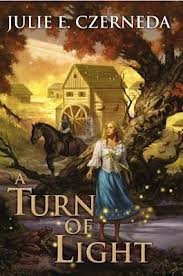 Jenn has never been outside the village of Marrowdell, but she's turning 19 soon and with adulthood comes her opportunity to leave and visit all the place she's heard of.  But Jenn is special, and if she leaves Marrowdell, it will destroy not only Marrowdell but the magical Verge it borders.

A dragon, and creature of the Verge, Wisp's penance is to keep Jenn happy - and in the village.  But when she wishes him into human form, it becomes more difficult to do both.  Because now that he's a human named Wyll, she can marry him, and fulfill her dream to leave.

Bannon is a Rhothan captain and a truthseer, able to see lies.  His country's new alliance has forced him to leave and search for a new home.  When he stumbles on Marrowdell he realizes he's found it.  He quickly falls in love with the village, the life of a farmer, and Jenn.

The Great Turn is coming, an eclipse during which anything is possible.  And Jenn isn't the only one hoping to change her destiny.

Czerneda's writing is very lyrical and she does a brilliant job bringing Marrowdell and it's people to life.  You quickly get a feel for who's who and what the various connections between the families are.  Peggs, Jenn's older sister, who funnels her emotions into baking, was especially fun to read about.

The magic in the book is interesting, from Jenn's ability to wish things into being to Wen's ability to talk to the Verge creatures trapped on their side.  I especially liked how Wainn, considered simple, has wisdom where magic and knowing yourself comes into play.

The Verge creatures, dragons aside, are all unique to this book.  I loved how they look different in the human realm vs when they're in the Verge.

This is a book that calls out the joy of the fantasy genre.  Reading this I felt how I did when I was younger and reading a book for the first time - fully immersed in the experience.  Czerneda's book feels fresh and optimistic in a way I'd forgotten fantasy could, what with the influx of gritty, more 'realistic' fantasy these past few years.

That doesn't mean it was perfect.  My main complaints centered on Jenn and her use of magic.  For the most part I really liked her, but there were times when she seemed very naive of consequences and the fact that other people have wishes and desires that might disagree with her own.  She's also fairly oblivious to her use of magic, which makes sense when she doesn't know she can do magic.  But even once she learns what she is capable of, she still somehow remains ignorant of the magic she performs.  I also disliked how, though she promises to ask Wisp/Wyll what he wants before making decisions for him, she continues to do so anyway.

Because the book is so long and focused on so many people, I found the pacing somewhat uneven.  There were parts that were fascinating and others that weren't.  At times my interest was in the sections dealing with magic and the main plot while at other times the scenes that were about village gossip and daily life were much more fun.  And while I enjoyed the various romance threads, particularly Peggs', Jenn's waffling about which guy she wanted drove me nuts.

The ending was a little anti-climactic given the build up.  I did, however, appreciate that it didn't depend on everyone keeping secrets.  Indeed it was great seeing everyone learning about the various difficulties Jenn would face and trying to find solutions.  I also liked that the various plot points were tied up, making this a self-contained novel, though it's the first of a series.  Still, if you like a good pay-off with lots of action, you won't find it here.

If you're nostalgic for the feel of wonder in your stories or like soap opera style drama and coming of age tales, than this is for you.  If you want action and gritty reality, look elsewhere.
Email ThisBlogThis!Share to TwitterShare to FacebookShare to Pinterest
Posted by Jessica Strider at 10:28