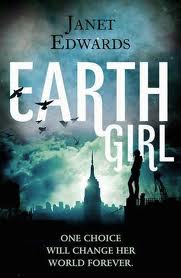 Cons: everything goes a little too perfectly for Jarra

Jarra is an ape, a throw back, a nean(derthal), handicapped: a human born with an immune system that won't allow her to portal to other worlds the way the Norms can.  Dumped on Earth to be raised by Earth Hospital as a ward just after birth.  She's fascinated with history, having worked on archealogical digs from the time she was 11.  She wants to prove that she's as good as any Norm, so she enrolls in a pre-history course run by an outside university for the purpose of meeting, fooling, and then telling off some Norms.  But as she gets deeper and deeper into her cover story, lying about most aspects of her life, she also realizes that maybe she didn't think her plan through very well.  And maybe these people don't deserve her hatred any more than she deserves their derision.

Set 600 years in the future, the book touches on a lot of science (solar arrays, Planet First, colonization, and most importantly, transportation portals), but the main focus of the book is on Jarra's decisions.  This is a character driven book that reads at a quick pace (I finished it in a day).

The author does an amazing job of making Jarra feel real.  One minute you're laughing out loud and a few pages later you're crying.  Jarra is almost a Mary Sue in that everything seems to go well for her, but she's definitely got some negative character traits.  And around the half-way mark something goes very wrong that affects her deeply.

I loved the linguistic shifts that allowed the characters to swear without swearing, and showed how culture and morality had shifted (both due to time and on various planets).  For example, Beta is more sexually liberated than the other systems, allowing for nudity and having triad marriages.  Meanwhile Gamma, who runs the university course Jarra is on, is much more conservative.

While most of the characters were 18, there were a few instances when they acted younger (mostly when baiting each other at the beginning of fights) but they generally acted their age, learning more about the freedoms of adulthood without going overboard.

There's an understated romance that pops up about half way through the book.  I really appreciated the mature way it was handled.  Unlike most teen books where angst rules, here the characters thought carefully about the future and what their current decisions would mean for their future.  I also liked that when Jarra was strong her beau went along with things, but when she needed help he stepped up, showing that they were both strong characters, but in different ways.

While in no way preachy, the book examines prejudice - and how it can hurt people on both sides.  Facing your own beliefs - both positive and negative - is a part of growing up, and it was nice to see Jarra questioning her hatred once she's interacting with Norms, rather than watching them in vids.  The Norms too, get some lessons on how important - and knowledgable - the Earth dig teams are, making them question their beliefs.

The book has a few flaws but I highly recommend it.  The humour alone is worth the read.
Email ThisBlogThis!Share to TwitterShare to FacebookShare to Pinterest
Posted by Jessica Strider at 12:20