Created by Aron Warner, Written by Philip Gelatt and Illustrated by Brett Weldele 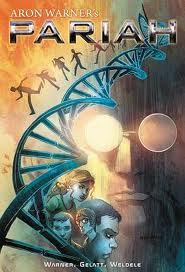 Cons: artwork wasn't to my liking, not much info given as to how vitros were created and why they're so different

This graphic novel collects the first four issues of the Pariah comic books.  Each comic details the background of a vitro character (or in one case a set of characters), and how they react when vitros are accused of blowing up a lab, releasing a virus into the environment.   Together, the issues form a complex picture of how vitros are treated, how they differ from 'normal' humans and how they're trying to survive.

The premise, that kids created using a special in vitro technique meant to eliminate disease, which boosts their intelligence, is a very interesting one.  I wish more information were given about how they were born/what makes them different, but the series focuses more on the current crisis than their origins.

There's a variety of protagonists, offering several points of view with regards to what's happening and how the vitros should deal with it, culminating in Franklin Hyde, whose radical plan is enacted to unexpected results.

While I enjoyed the story the artwork wasn't to my liking.  This is purely a matter of personal taste and as the art didn't detract from the story it wasn't a problem.  But, unlike other graphic novels, this isn't one I pick up because I liked the artwork.

This graphic novel ends with the characters coming together in unexpected circumstances, and the kind of cliffhanger that makes you wish the artist could draw faster.

Pariah Volume 1 comes out from Sea Lion Books on February 19th.
Email ThisBlogThis!Share to TwitterShare to FacebookShare to Pinterest
Posted by Jessica Strider at 12:19