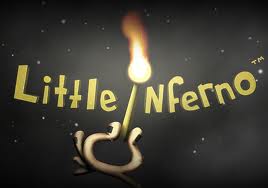 Pros: fun, quirky items & explanations, takes about 6 hours to complete, letters from various people create a story around the burning, good graphics (mix of cute/creepy), music is repetitive but not annoying

Cons: some of the combos are hard to figure out, which gets frustrating, only supports a single touch point (tetronimos, for example, are hard to place as you can't rotate them)

In a future where the weather is getting colder, the Tomorrow Corporation has created Little Inferno: Entertainment Fireplace so little boys and girls can burn their toys and stay warm.  Burned all your toys already?  Then buy new ones from the catalogues they send you!  You get coins for burning things and stamps for completing special burn combos.  You also get letters from the owner of the Tomorrow Corporation, the Weather Man and a little girl who wants to be your friend.

This game is so much fun to play.  I've played it through twice already.  The items you're buying are a mix of cute and creepy.  For example: "Corn on the Cob: Made with all-natural, high-fructose corn syrup!  Also doubles as car fuel."  Put this in your fireplace, light it up and watch the kernels pop.  Or "Raccoon Plushie: So cuddly and adorable you can't not hug him!  May contain rabies."  He makes little raccoon noises and froths a bit at the mouth when you burn him.

The music is fun and though it gets repetitive, it's never annoying, which is so important when you're listening to it for several hours in a row.

My only complaints were that a few of the burn combos were really hard to figure out (I ended up googling one and trying combos for at least half an hour for another).  There's also only a single touch point, which is fine for most of the items, but it meant that with some items, like the tetronimos (or tetris blocks) it was very hard to place them specific ways before burning them.

The Tomorrow Corporation has its own website with more information on the game, including a free download of the soundtrack.  Rated for Teens due to crude humour and drug references, it's currently available from the Apple app store ($5 Canadian), Steam for Windows (and soon for Mac and Linux, though it's $10 there), and the Wii U eshop.