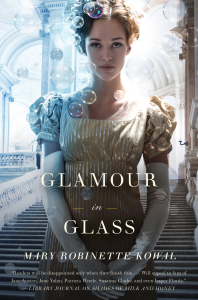 Married a scarce 3 months and already completing a comission for the Prince Regent, Jane and Vincent decide to take a Honeymoon trip to visit an acquaintance of Vincent's in Belgium.  But with Napoleon recently abdicated the throne of France, things in Belgium are unsettled as Vincent and his friend exchange glamour secrets.

This is a fairly quick read, though the pacing is slow.  It reads like a novel written during the regency period, as well as one set in that period.  Kowal knows her stuff, and uses period words and situations perfectly.  So don't expect any sex and only limited impropriety.  Some readers may find parts dull - particularly prolongued dinner conversations - but I enjoyed the entire book.

In addition to the Sphere Obscurcie, this book introduces the Chastain Damask as well as the possibility of making glamour transportable, rather than tied to the earth as usual.  The couple also create a few glamourals along the way.

My favourite aspect of the book is the complexity of Jane and Vincent's relationship.  She's happily married, but easily shaken in her belief of his regard, especially when he becomes more and more preoccupied and evasive in Belgium.  Jane excuses his actions, rationalizing them away, while at the same time feels saddened by the distance that seems to grow between them.  It's a very realistic look at newlyweds, the constant shift between bliss and uncertainty with regards to your partner.  The need for intimacy with the acknowlegment that you can never fully know another person.

The climax of the novel is quite exciting, bringing in glamour, politics and a hint of war.
Email ThisBlogThis!Share to TwitterShare to FacebookShare to Pinterest
Posted by Jessica Strider at 12:05

I love how magic undergoes development and change in this series, rather than being static. Jane and Vincent are made of awesome that way.