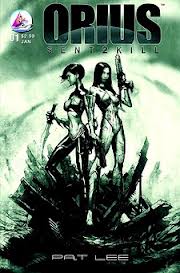 There are two races on the planet Orius, who are forced to work together after years of segregation, in order to find a means of leaving their dying world.  They create artificial intelligences meant to infultrate Earth, which they're testing by having them fight each other to the death.  Meanwhile on Earth, two women meet and unexpectedly know each other, while one of their bosses wonders what is happening with regards to the deal he made with the Orius Greys.

As this is a review of the first issue of the series, I'm going to give my impressions rather than a full pro/con breakdown.  The artwork is monochrome, all black, white and grey, with a hint of green, which looks fantastic.  The lines are sharp and the shading well done.  There's a lot of motion in the characters and scenes.  My only concern here is that because it's all black and white, it's hard to tell a few of the characters apart, especially when the action picks up.

The story is really interesting, with multiple things happening at once, both on Earth and Orius.  There's only time for a brief introduction of the many characters (I suspect some of the Earch and Orius characters overlap eventually) but they sound pretty cool.  The two alien AIs are women, which has the potential to be really cool in a kick-ass sort of way, or exploitative, as they're dressed in typical female comic attire.  I'm expecting more of the former based on how the story went in this issue.  The story, alas, cuts out suddenly at the end of an intense action sequence and a small bit of dialogue.  You turn the page to find... the issue is over.  It's definitely an intriguing opening plot wise.

Out from Sea Lion Books on March 13th, this is definitely a comic to keep your eyes out for.
Email ThisBlogThis!Share to TwitterShare to FacebookShare to Pinterest
Posted by Jessica Strider at 17:23