Book Review: The Office of Mercy by Ariel Djanikian 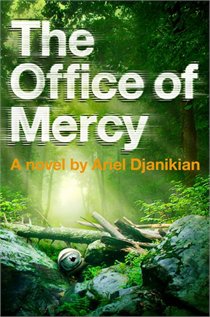 Cons: protagonist is very naive and makes some questionable decisions

Natasha Wiley lives in America-Five, one of several enclosed cities set up by the Alphas to protect the people from the evils of the outside world: suffering and death.  She works in the Office of Mercy, whose job it is to end the suffering to the tribespeople living outside their walls, by giving them a quick, merciful, death.

But she starts to doubt her mission and the 'wall' she's been taught to keep up between herself and the humans living outside.  She empathizes with them, and when she comes face to face with some tribesmen, she makes choices that forever change her life and the lives of those around her.

This book was problematic for me in that I had certain expectations about what was going to happen, given that it's a dystopian novel, that the author didn't follow.  The bad thing about this was that I spent a lot of time thinking about how I would have done things to elicit the response I thought the author was going for rather than enjoying the fact that this dystopian novel was going in directions I couldn't predict.  Looking back on the book after finishing it,  it followed the dystopian conventions, just not in a way that's easily recognizable while you're in the middle of it.

Natasha is a complex individual.  She's learned the propaganda of the inside and has helped 'sweep' (ie kill) tribespeople in the past via the intelligence she's gathered on them.  However, her upbringing has left her surprisingly naive with regards to the tribespeople.  Despite watching them on screens in the Office of Mercy she doesn't seem to understand how difficult life outside really is.  And while her sheltered upbringing does make it understandable that she not comprehend how people relate to each other in a war like situation, some of her decisions are still frustrating to read.  Instead of understanding them as separate people with their own motivations and drives, she projects her own desires on the tribespeople, something she's been very specifically trained to avoid doing, and makes decisions based on faulty reasoning.  Indeed, she makes decisions that lead to consequences she never considered possible.

Part of me wanted Natasha to get away with her plans, as ridiculous as they seemed, so she could have a happy ending.  And part of me wanted to see her come face to face with the consequences of her actions in a true coming of age style ending.  Because I wasn't sure what the author was up to, the conclusion took me completely by surprise.  In retrospect all the clues were there, but my uncertainty with regards to what message the author was trying to get across made the ending more exciting.

In the middle of the book Natasha falls in with a group of malcontents in the community who also believe the sweeps should stop.  I found it interesting that rather than portray these people as freedom fighters in her eyes, they came off as crackpots.  Even when she was working with them.

There are several discussion possibilities for this book with regards to how people are portrayed and how/if we project our own beliefs on them rather than seeing them for who they are.  I was surprised that a group with the opportunity to brainwash their citizens so easily (as propaganda does to the young) would end up with so many malcontents without some sort of outside force giving opposing views.  Do people question their beliefs if they're not faced with a reason to?  Under what circumstances?

The book uses several conventions from both post-apocalyptic and dystopian novels.  The ending packs a punch though some of Natasha's decisions are hard to swallow and may turn off readers who want a grittier read.
Email ThisBlogThis!Share to TwitterShare to FacebookShare to Pinterest
Posted by Jessica Strider at 14:57