Today I welcome James K. Decker, author of The Burn Zone, and pseudonym of James Knapp, to my blog.  I've read his previous books, State of Decay, The Silent Army, and Element Zero and highly recommend all three. 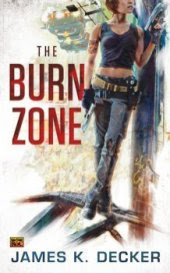 Making stuff up is fun, but it’s hard.

Although I've written a lot of Science Fiction, The Burn Zone marks the first time since college that I've ever written about an alien species. They are central to the story, in fact one of the first ideas that sparked the series was imagining one of what I came to call the Haan watching a human from the shadows of an alleyway, but their creation was one of the most difficult parts. At the time, I had a sense of how I wanted them to be - intelligent, and helpful, but secretive. I had no idea how involved coming up with my fictitious species, the Haan, would become.

There have been hundreds of alien species concocted by writers over the years - just go to tvtropes.com and follow any alien thread and you'll see (just finish this post first...once tvtropes sucks you in you will never emerge). Coming up with something that hasn't been done is no simple task, as almost anywhere you step will press your shoe squarely into a used trope. How the haan look physically is something that went through a few iterations, but though I'm sure parts of them may have been done before, I like where they landed. I knew that I needed them to be somewhat humanoid in appearance, but that I didn't want them to be 'prosthetic forehead' aliens (not a dig - some of my favorite television sci-fi like Star Trek and Farscape put them to very good use). Their physiology is very different from ours as you will see, but their spindly figures, translucent skin and glass-like bones are arranged in a two legs, two arms, one head configuration, and for a good reason. I put everything on display with the haan, and their hearts, beehive ribcages and other organs are visible, if cloudy. The ambient light from their eyes illuminates the inside of their faces and skulls, to reveal shapes like feeding tubes, their two brains, and other nodules of less-clear purpose. Alien, but not without a certain degree of elegance, and with an innate level of exposure that makes them vulnerable.

Still, while appearances matter (as the haan well know), the key to any alien race (or fantasy race, if you lean that way) isn't as much about how they look as it is about who they are. Unless you're dealing with, say, the xenomorphs from Alien where the point of them is to be dangerous and little else, then the race has to have depth to it. They have to have societal norms, and deviations from those norms. They have to have purpose, at both the group and individual level. I knew going in that I didn't want a single trait race who came from a planet of merchants, or a planet of warriors. I wanted them to be cohesive as a group, because they have to be out of necessity if nothing else, but vary in attitude as individuals. Nix, the haan we get the closest look at in The Burn Zone, ultimately goes against the grain because he doesn't agree with a lot of his kind's attitudes about their situation.

The haan are essentially stranded in the middle of a huge city, their ship surrounded by a force field. After years of turtle-ing, they slowly began to emerge. We meet them fifty years in, when relations are still tense but they've begun to be granted extra space in the form of colony districts which are surrounded by security walls. Because of the situation they're in, the haan are, understandably, cautious, and secretive. No human has ever been inside their ship, or even behind the force field that surrounds it. They reveal themselves slowly, and what is seen in the first installment of the series is just the tip of a very large iceberg.

What drew me to the idea of using aliens at all, though, and what interested me most of all, was the idea of a much more advanced culture, even a small sample of one, stumbling into an already entrenched society of less advanced people. There may not be many haan compared to humans in the city of Hangfei, but Cortez didn't have that many people with him relatively speaking when he found the Aztecs, either. That's not to say the haan are conquerors - they're not - but they have a huge impact on the world around them nonetheless. The world they find themselves in is extremely overcrowded, and space is at a premium. If the haan want to grow, and to survive, then they'll need a share of that space, and getting it won't be easy. How far they're willing to go, both at a group and individual level, to ensure their race can survive is something the book studies.

I can say no more without risking spoilers. I hope you'll see how their situation plays out in The Burn Zone, and I hope you enjoy the world, and the aliens, I've created.

He wrote continuously through high school, college and beyond, eventually breaking into the field under the name James Knapp, with the publication of the Revivors trilogy (State of Decay, The Silent Army, and Element Zero). State of Decay was a Philip K. Dick award nominee, and won the 2010 Compton Crook Award. The Burn Zone is his debut novel under the name James K. Decker.

He now lives in MA with his wife Kim.