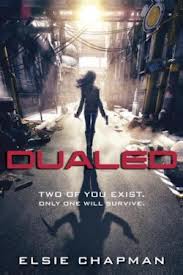 For Parents: no language or sexual content, lots of gun and knife violence

West Grayer's world is an enclosed city.  Fear of those on the outside breaking in created a law that all babies are born with the physical aspects of two sets of parents, genetically altered to look like identical twins.  Sometime between the ages of eleven and eighteen both people are activated.  At that point they have thirty-one days to kill their Alternate (Alt).  If neither completes, they'll both die.  West's oldest brother and younger sister were both killed by their Alts.  Her mother died as a PK, a Peripheral Kill, during someone else's completion and her dad's just committed suicide.  West is determined to survive her activation and prove she's the best qualified for their city's way of life.

This is a teen book adults won't enjoy as much as the intended audience.  As a protagonist, fifteen year old West is too determined to do things herself, doesn't need help and makes her decisions with the idea that her actions don't impact anyone else.  She's angry and feeling unworthy of being the alt left alive, and makes choices that cause her to feel these things more over time, rather than less.

Despite how the synopsis sounds, this isn't a cat and mouse hunt between the girls like Marie Brennan's fantasy duology Doppleganger and Warrior and Witch (republished as Warrior and Witch).  It's focused primarily on West's avoidance of her assignment, though the ending does have some tense scenes when she's finally on the prowl.

It's also not a vehicle of social commentary, the way Battle Royal and the Hunger Games are.  There's no deeper meaning to why the kids are forced to kill each other or much in the way of questioning its efficacy of turning out a society of adults prepared for - and ready to repulse - an invading army.

I found West's decision to become a striker interesting as I would have expected assassinating a legal target to be easier than killing random people.  I wanted to see more of the psychological effects that killing had on her.  Instead she's emotionally shut down (which is an effect, but not the one I'd expected).  I didn't quite believe she would be accepted so readily as a striker.  I would have expected their qualifications required more than merely a desire to become one.  She should have had to pass some sort of test of skill and/or discretion before she got the tattoos.

I expect teens will love this, while adults who want more philosophical discussion in their books may want to give it a pass.
Email ThisBlogThis!Share to TwitterShare to FacebookShare to Pinterest
Posted by Jessica Strider at 10:32