I really enjoyed Guy Gavriel Kay's previous book, Under Heaven, and think it's cool he's auctioning off an autographed copy of his newest book, River of Stars, with the proceeds to go to Indigo (my bookstore's parent company)'s Love of Reading Fund. 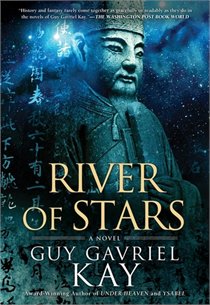 Ren Daiyan was still just a boy when he took the lives of seven men while guarding an imperial magistrate of Kitai. That moment on a lonely road changed his life in entirely unexpected ways, sending him into the forests of Kitai among the outlaws. From there he emerges years later, and his life changes again, dramatically, as he moves toward the court and emperor while war approaches Kitai from the north.

Lin Shan is the daughter of a scholar, his beloved only child. Educated by him in ways young women never are, gifted as a songwriter and calligrapher, she finds herself living a life suspended between two  worlds. Her intelligence captivates an emperor and alienates the women at court. But when her father’s life is endangered by the savage politics of the day, Shan must act in ways no woman ever has.

In an empire divided by bitter factions circling an exquisitely cultured emperor who loves his gardens and his art far more than the burdens of governing, dramatic events on the northern steppe alter the balance of power in the world, leading, under the river of stars, to events no one could have foretold.

From the ebay auction:

To celebrate the worldwide launch of international bestseller Guy Gavriel Kay’s much anticipated new novel River of Stars, Penguin Canada is auctioning the first book of the first print run, autographed by the author. Signed and verified by the printer and the publisher, this first copy includes a product identification slip and letter from the printing press identifying the book as the first copy printed of the first edition.

All proceeds from the auction will be donated to Indigo Books & Music, Inc.’s Love of Reading Fund (www.loveofreading.org). The fund directly supports high-needs elementary school literacy programs across Canada.

Inspired by the glittering and decadent Song Dynasty, River of Stars immerses us into an epic tale of prideful emperors, battling courtiers, nomadic invasions and of a woman fighting to find her place in the world. Guy Gavriel Kay, once again, astonishes with his skilled balance of fantasy, historical fiction, romance, and literary style and craft that results in an unforgettable journey destined to be one of his greatest achievements to date.

River of Stars will go on-sale in Canada and the United States on April 2, 2013.

Email ThisBlogThis!Share to TwitterShare to FacebookShare to Pinterest
Posted by Jessica Strider at 17:29