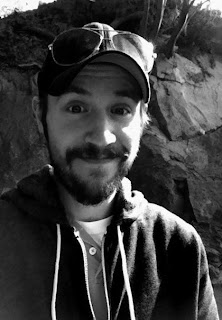 > What is Knuckleduster about?

Knuckleduster is about friendship and the lengths we go to for the ones we love. That concept is enveloped in a near-future science fiction tale that’s steeped in throwback noir, gadgetry, a few laughs, a car chase, robots, and conspiracy-uncovering derring-do.

> Where did you get the idea for the eye implants that Brody gets in Knuckleduster?

Brody’s carotene lenses came about when I was looking back on the early sci-fi writers and how much of what they dreamed up is now a reality. (Robotics and Isaac Asimov, Google Earth and Neal Stephenson.) I considered if something I wrote were to get into the hands of someone far smarter than I, what dreamed-up thing would I want made into a reality? I know someone who is currently losing their sight. And I wish carotene lenses, or even the sonar device Brody wears when not using the lenses, were possible today.

I was in the backyard at four or five. I found this vaguely humanoid-looking twig, and just started coming up with a whole story for this little person. Out of some river rocks and pine cones, I made a house for him. A kitchen, living room, dining room; bowls from acorn caps, a leaf for a bed, etc. Once I had everything “figured out” about his life and an answer for every need he might have, I went and got my mom and told her all about this stick person’s life. She patiently listened. When I was through, she looked at me and said, “You’re going to be a writer.” I liked the sound of that, that I could “figure out lives” of characters and it’d be, as a grown-up, an actual thing I could do with my life. From that point on, that’s how I identified myself. Later on, when I started hearing in my head narration to the action sequences of movies as I watched them, I kind of thought I should probably start writing my own stories down or seek medication. A few dozen notebooks filled with stories later, passed around to friends on the bus, or later, emailed to a girl I wanted to impress, I started asking myself if I didn’t do this for a living, what else would I do? I didn’t have an answer. I had to do it.

In my next novel, Fabrick, the bulk of the story takes place in Geyser. It’s this city that’s been built around this enormous . . . well, geyser, and it’s easily one of my favorite locations I’ve ever come up with. I dream about that city. And, if I could, I’d live there. Maybe as a shoe cobbler or an employee at one of the markets, or a travelling salesman with a cart selling wind chimes or something. A character that doesn’t even get named in the book, but is still a citizen of Geyser, the main character in his own life. Maybe not an adventurer, or even one of the “weavers,” but just some guy, doing a job, living a life. On another planet.


> You've had short stories published in several magazines including Underground Voices, Cannoli Pie, and The Legendary. Beyond the matter of length, do you find it easier writing short stories or novels?

With short stories, the beginning-middle-end formula isn’t necessary. Which can be really fun. And a “hard” ending is easier to get away with. You can be ambiguous, hit the ground running in the middle of the scene, perhaps just give a slice-of-life story that could be a part of a novel someday. I’ve written a lot of short stories that I never even sent out because that was how I worked out a character, found the vibe for a novel to expand on. They’re great jumping-off points. Both Knuckleduster and Fabrick started out this way. I can’t really say I prefer one or the other, short stories or novels. Story is story, regardless of length or by what means it’s published. It all depends on what you want to say. 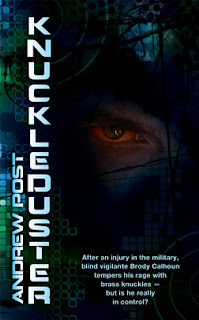 
The first novel I wrote was about a hard-nosed space trucker who gets wrapped up in an intergalactic war. I want to say I got to about 150,000-200,000 words or so before realizing it wasn’t very good. With a heavy heart, I let it go. I wrote that over the course of three years, I think. It was good to do, even if it never got submitted anywhere because I think all writers have one bad novel they need to write, just as a means to learn. But a lot of the ideas I came up with in that novel I have since used in other places. The main character was remarkably similar to Brody from Knuckleduster, actually.


There were a few times in Knuckleduster where characters are expressing how much they care about either one another or a loved one that’s not currently present—like Thorp when he’s talking about his sister. Talking about love, expressing it, letting someone you know you really care about them, is hard enough to do in life without sounding silly, but when doing it in fiction, it has to sound natural while still be interesting to read. In fiction, unlike real life, you can go back and tweak things, erase the stuff that might come off as awkward or redundant. But I try my best to leave most of that in, though, because in real life when someone expresses themselves, it is tough. It is awkward. There’s a lot of ‘ums’ being thrown around. And in fiction, if it’s true to the heart, it shouldn’t be any different. Finding that balance of realness and readability is a tight-rope sometimes.

I tend to write in the morning, and cut myself off at midday. It’s when I’m at my best, I think, with a fresh cup of coffee and the radio on and the world isn’t quite awake yet. The morning, I believe, is when the good ideas are still floating around in the ether waiting to get snatched up. I tend to write in the same place I start a project at until it’s through. Geography is important, I think. Study the meteor where it landed, don’t haul it off to some new location to study. There might be some important pebbles that get left behind.


Seriously, though, the best thing is when you hear someone you’ve never met before say is they really enjoyed your book or story. We write to be read, and when someone does that, likes it, and tells you they liked it? So, so great. Warms the heart.

The worst thing is that the cursor of most word processors blink. Blink, blink, blink. It’s like that impatient person behind you in line at the ATM tapping their toe and sighing every three seconds. When I’m blocked or have written myself into a dead end, that ever-blinking cursor and I have a staring match. And he—always—wins. I keep going, grumbling at him, even if I feel what comes out might be wrong for the story at the time. But I remind myself it can be fixed or changed later. You can’t have a decent manuscript without getting through that first draft. It’s like cursor Morse code. Blink, blink, blink means “Keep. Writing. Keep. Writing.” A true love/hate relationship if I ever saw one. 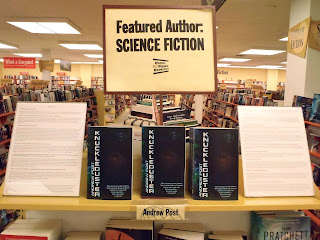 That so many people will be willing to help you if you just ask. The publishing industry is full of helpful people and so many are willing to send you a link or the office of an agency who might be interested in your work, or even a currently-seeking publisher—if you just ask.

It’s an oldie but a goodie. Never give up. If you want to achieve something—whatever it may be—no one ever got anything by throwing in the towel. And even if you could, would you want it? No. You want to earn it, make it on your own work and perseverance. The brass tacks tough love version: No one remembers the quitters.

I do have one that I use. When working on a manuscript, find a song that really fits the feeling of your story. One that makes the world come alive in your mind when you listen to it. One you could expect to hear in the background of all the major scenes. Listen to it when writing and when you’re just thinking about the story for a while. Let your story and the song develop a sort of symbiotic relationship. Once that’s established—and this is the important part—never listen to that song again unless you’re blocked. Using songs as “mind keys” is an absolutely essential practice for me. For every project I have one squirreled away.

Before starting in, I tend to have a place in the plot I want to reach before the end of the day. I don’t outline the plots entirely, but I keep an idea of what I want the end to be and a few chapters ahead of where I currently am. If I flesh out the whole thing in outline, I get bored with it. If there’s no surprise in it for me as a writer, there sure won’t be one for a reader. Then, if I don’t manage to reach that projected plot point by the end of the day, I’m okay with it. I don’t beat myself up over it. But tomorrow, I darn well better get there.

The first novel I was very serious about sending around, I think I was rejected by every single literary agent working at the time. If not all of them, then a solid majority. Rejection and harsh criticism will drive you insane if you’re not careful. It comes with the territory, everyone gets rejected. So laugh it off and press on. If you think the manuscript absolutely cannot be fixed, pluck out what you can use elsewhere and put the rest to bed. Try a new genre, try a different tense or perspective. Maybe that other work wasn’t really your voice and trying something new will bring it out. And never use phoenix metaphors like I almost did just now.
Email ThisBlogThis!Share to TwitterShare to FacebookShare to Pinterest
Posted by Jessica Strider at 10:18

Great interview on both ends!!