Myths and Legends: Dragonslayers, From Beowulf to St. George by Joseph McCullough 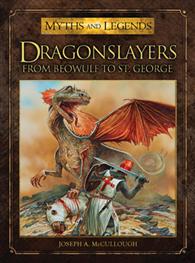 Myths and Legends is a new series by Osprey Publishing.  If you've never heard of them, they publish a lot of short, detailed military history series: Men at Arms, Fortress, Campaigns, etc.  Each volume is a crash course in a very specific aspect of history: Byzantine Imperial Guardsmen 925-1025, The Fall of English France 1449-53, M103 Heavy Tank 1950-74.  The Myths and Legends series is part of their Osprey Adventures books, 'where fact and fiction meet'.  The three volumes currently in print are: Jason and the Argonauts, Dragonslayers, and The War of Horus and Set.

Dragonslayers is specifically about the European tradition of serpentine monsters, how their legends evolved and who killed them.  The book starts with an explanation of what a dragon is, historically speaking, and how the image of the dragon evolved into the creature we think of today.  There are a lot of gorgeous illustrations throughout the book, both historical and ones commissioned for this book by Peter Dennis.  Unlike the older images, Dennis places his subjects in period appropriate clothing.  For example, Sigfried/Sigurd is often depicted in barbarian skins.  In this case, Dennis paints him in the armour of a 6th C. Germanic warrior.  Dennis also uses the actual descriptions of the dragons given by the texts for his images, rather than making up his own, as a lot of older artists did (so there are several sea serpents and crocodile-like creatures here).

I loved how McCullough placed each story in its historical context, explaining who the dragonslayers might have been and how each story has been modified and expanded upon.  He also cautions against using a European lens when dealing with 'dragons' from other cultures.  There are a few non-European stories mentioned at the end of the collection, but he emphasizes the fact that the dragonslayer is a European construct, though other cultures have similar creatures and heros (at least, when their stories are told by Europeans).

The stories are summarized concisely, which makes this a great introduction to European myths, even if it's not an in depth study.  Each chapter only shares a few stories - the most famous - out of the numerous available.  Some of the other stories are given boxed summaries, which helps flesh out the chapters.

Covered in the book are: Ancient, Norse, Holy, Medieval and Dragonslayers From Around the World.  It's a great jumping off point for reading the stories themselves, though historians like me might prefer longer synopses here.  My only real complaint with the book was its length.  It's much too short. :)  I was also surprised that the final chapter didn't mention Chinese dragons, which are famous.  The author has a brief explanation for this, wherein he states that Asian dragons are generally gods or benign creatures, and so don't need slaying that often, which I was unaware of.

If you're interested in old stories about dragons and dragonslayers then pick this up.  It's a fantastic introduction.
Email ThisBlogThis!Share to TwitterShare to FacebookShare to Pinterest
Posted by Jessica Strider at 08:30