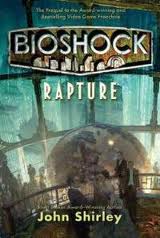 Pros: very interesting and complex characters, city founder has a unique philosophy, slow apocalypse, references to the game are subtle, has a sense of closure so it works as a novel not just a game history

Cons: don't learn as much about certain people/items from the game as I'd have liked, major spoilers for those who haven't played the game

Bioshock: Rapture is the prequel novel to the Bioshock video game franchise.  It explains the founding - and ultimate deterioration - of the undersea city, Rapture.  Andrew Ryan, the industrialist who designs and builds Rapture has a philosophy upon which his uotopia is based, summed up in the following quote from the game:

The book is a slow apocalypse taking place in an enclosed environment, with characters and quotes from the games scattered throughout.

The novel is told through several points of view, predominately those of Chief Sullivan, Bill McDonagh and Frank Gorland.  People familiar with the game will recognize - and probably read with more interest - scenes with Brigid Tanenbaum and Dr. Yi Suchong (the creators of ADAM and EVE), Frank Fontaine and others who get briefer attention.

The book contains some major and minor spoilers for the game if you haven't played it yet.  Most notably it explains who Atlas, the man who guides you through the first game, is.  As a book independent of the games, the author did a good job of creating one narrative thread that extends beyond Rapture, giving the text a narrative arc with an element of closure.  Since the book otherwise ends where the first game begins, this helped give it closure independent of the games, for those who might be interested in an apocalyptic story but who otherwise aren't interested in playing the game.

As a lot of the character explanations in the game happen during fights, the book does a great job of explaining things - in sequential order.  The discovery of ADAM and the creation of EVE were very interesting, thought I'd have liked learning more about how the Big Daddies were made.

Because the book covers so much time, some characters, who get levels in the game, are barely touched on, like Dr. Steinman, Julie Langford and Sander Cohen.  And most of the events in general are glossed over.  Even with such fundamental aspects of the game as ADAM and EVE, the book doesn't go in depth, allowing the mystery of the various Plasmids (psychic powers obtained via taking ADAM) to survive.  Also, some common elements of the game are late additions to Rapture, like the Circus of Values vending machines, and so only show up at the end of the book.

As an apocalyptic novel it succeeds quite nicely.  The book doesn't depend on an immediate failure of everything as films like Jurassic Park and Westworld do, where one action (or several actions in one night) undermines everything quickly, Rapture faces a slow decline, but one heightened by the fact that the people living there are unable to leave when things start to go bad.  There are economic problems, ideological clashes led by those who don't like how things are run, Plasmid addictions (compounded by the lack of regulations on science, especially when it comes to testing new drugs), and more.

I read the book fairly quickly between sessions of watching my husband play the first game, and enjoyed it a lot.  I would suggest, if you want to play the games, to play the first one before reading the book.  In fact, reading it between games gives you a good grasp of the history of the place (and many events from the first game) without spoiling the gameplay.  I did notice a few extremely minor contradictions between what the book said and what characters in the game say, but they're so hard to catch I found myself questioning my memory over them.  The writing is good and the story is quite interesting.
Email ThisBlogThis!Share to TwitterShare to FacebookShare to Pinterest
Posted by Jessica Strider at 11:35

Frank Fontaine and Frank Gorland are the same guy. He changed his last name many times.