History Book Review: Hildegard of Bingen: The Woman of Her Age by Fiona Maddocks 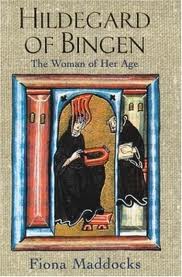 Pros: clear, easy to read biography, warnings against drawing conclusions without sufficient information, examples from contemporaries to explain medieval thought and give context for Hildegard's actions and/or what may have happened to her when information is scarce

Cons: the introduction and conclusion gave a lot more information about the modern state of the cult of Hildegard than I was interested in

Fiona Maddocks takes historical sources to piece together Hildegard of Bingen's life.  Her prose is engaging and, though scholarly, easy to read.  She obviously knows modern interpretations of Hildegard's life and works, mentioning them in her book while at the same time cautioning modern readers against looking at Hildegard's actions with a feminist/lesbian slant.  Hildegard was very much a woman of her time and there isn't enough evidence to make such conclusions (while at the same time understanding that this doesn't mean such conclusions are wrong).

For times when the information about Hildegard herself is scarce (her childhood for example), Maddocks mentions stories and writings of contemporaries who would have had similar experiences.  For example, there is some doubt that Hildegard joined the monestary at the age of 8 but there are other cases when boys and girls of similar ages in Medieval times felt called to serve their God behind walls, so it's not unheard of that she could have come to her vocation early, especially knowing her parents had promised her to the church.

I was unaware of just how much Hildegard had written and on how many subjects - the natural world (plants, animals, rocks), music lyrics and notation as well as her visions.  Makes me want to read some of her own works now, though Maddocks warns that most of the English translations are by a gentleman who translated them not from the original Latin but from a German translation (meaning you're getting interpretations of someone else's interpretations, compounding whatever translation errors/decisions the previous translator made).

If you want to read about this fascinating woman while maintaining proper historical distance, I highly recommend this book.
Email ThisBlogThis!Share to TwitterShare to FacebookShare to Pinterest
Posted by Jessica Strider at 10:50