Book Review: Myths and Legends: Jason and the Argonauts by Neil Smith 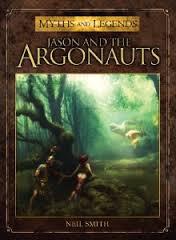 Jason, raised by the centaur Cheiron, returns to the kingdom unjustly stolen from him.  The usurper promises that if Jason can return with the fabled Golden Fleece, he can have his kingdom back.  Jason gathers together a crew of heroes and sails with the blessings of the gods to fulfill this quest.

While I've long been a fan of Greek mythology I have to admit that Jason and the Argonauts isn't a story I particularly like.  The heroes are all kind of whiny and depend on the gods too much to solve their problems.

So while I can appreciate the artwork that peppers this retelling, both that by Jose Daniel Cabrera for this edition and older works, the story itself didn't impress me.  The story was told as a narration, with no emotion and little tension, despite the fact that the crew face innumerable crises.  At no point did I feel the crew might fail in their quest (though they too often did) and I felt no sorrow for any deaths or betrayals along the way, nor any happiness or relief for their successes.

There is a decent introduction explaining the sources for the story and modern adaptations, but there was nothing on how this story would have been told by the Greeks, which I would have appreciated.  The story originated in an oral culture.  Was it told like medieval ballads, with different poets adding and changing verses to adapt it to the current audience?  Is that why some of the written versions contradict each other on some points, like the inclusion of Atlanta?

It's a thorough, if bare bones retelling of the story.  I'm still looking forward to other editions in this series, even though this particular one wasn't entirely to my liking.
Email ThisBlogThis!Share to TwitterShare to FacebookShare to Pinterest
Posted by Jessica Strider at 09:00