Book Review: What Happened in Witches Wood by Stephen Henning 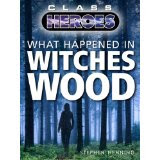 Cons: Stannard asks others to do illegal things

For Parents: no sexual content or swearing, a decent amount of violence (shootings, beatings, attacks using superpowers - deaths, when they happen, are off page)

What Happened in Witches Wood is the second book in the Class Heroes trilogy.  If you don't want spoilers, check out my review of book 1, A Class Apart.  The author has also done some creative news reports that act as a prequel for this book.  You can learn about ghost sightings in Witches Wood, and about earning money as a drug test subject for G-Netik.

Fourteen year old twins Sam and James are living with their mom at their Grandparent's farm after their hosptial stay in London.  Their dad's censure on using powers doesn't hold up under his absence and the twin's boredom, and so Sam uses her superpowers to run into town.  She witnesses a pair of men rob the post office and can't let them get away.  Her decision puts her in the path of Sir Michael Rosewood, millionnaire and CEO of G-Netik, a local genetics laboratory.  He's also the father of a creepy young woman named Lolly, whom the kids saw in London in connection to their bombed school bus.

Meanwhile, the woods outside their house plays host to various ghost hunters, looking for the ghost of their dead aunt.  A girl who looks a lot like Sam.

Told in a series of very short chapters, this book hooks you and never lets you go.  Jumping between viewpoints allows you to know what everyone's doing and thinking while making the plot speed by.

The characters were interesting.  A few times I wished the twins would figure something out faster, but then I would remind myself that they're 14 and wouldn't necessarily see the connects the way an adult would.  And they solved Katie's mystery before me, so...

I was amazed by the complexity of Sir Michael's opperation and how quickly he arranges things with the twins.  His powers were creepy, and make it understandable why those without powers would fear those with them.

There's a decent amount of violence in the book, mostly dealing with superpowers (people being beaten up, fire, telepathy).  While there are accounts of death, the death scene itself is always off page.

My only major complaint with the book was that Detective Inspector Stannard keeps asking other people to do dangerous and illegal things to further her investigation.  Considering she's supposed to be on the side of justice, her putting other people's lives on the line for evidence she can't even use (at least not in court) was surprising, and made me question her motives.

While tying up most of the loose ends, the book did leave a few things open for a third volume.
Email ThisBlogThis!Share to TwitterShare to FacebookShare to Pinterest
Posted by Jessica Strider at 15:33