It takes 11 hours to drive between Addis Ababa and Bahir Dar so most people opt to fly there. We didn't, and while the roads were rough at times and we had to use 'nature's bathroom' the views more than made up for any discomfort. This is a viewpoint near Debre Libanos church. 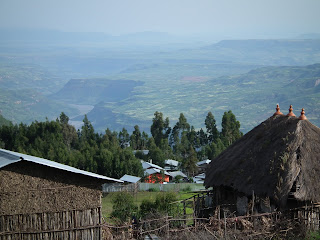 We didn't really explore much of Bahir Dar, using it more as a staging point for seeing the Blue Nile Falls (an hour and a half drive away) and Lake Tana.

Our first excursion was to the falls. In addition to our city guide, you must also hire a local guide for the falls (this was common at several sites as a way of employing local people). While you can pick up any random person vying for the job it is worth getting an official guide, as they have better English skills and usually have a firm grasp of the history and interesting facts of the sites they're showing.

The falls require walking up the opposing hill (which at this altitude is a bit more of a workout). We were there just after the rainy season ended so they were very impressive. In the middle of the dry season the water is diverted to the hydro electric plant and the falls basically stop flowing. After the falls is a suspension bridge across the gorge, followed by a short walk and a ferry ride across the Blue Nile back to the car park. 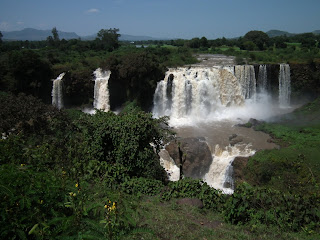 We saw these yellow and orange flowers everywhere and our guide explained that they were called meskel flowers. Meskel is the celebration of finding the True Cross by Empress Helena and comes just after the Ethiopian new year in September, which is the only time of the year these daisies bloom. They are endemic to Ethiopia. 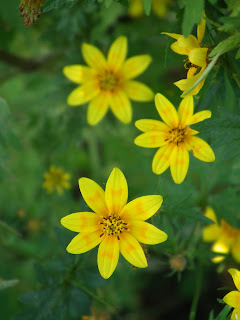 Back in the city we wandered around the market a bit, seeing the variety of spices, grains, vegetable and more for sale. There were crates full of live chickens, piles and piles of red onions, aisles for clothing, plastic shoes, and more. It's quite a sight. 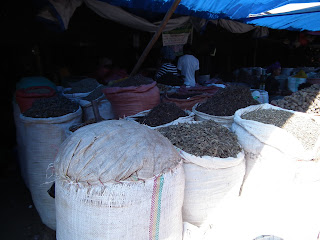 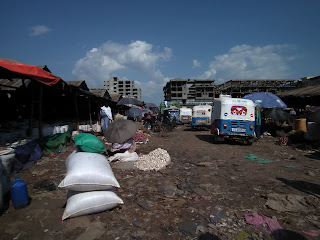 The next day we took a boat ride on Lake Tana, saw some hippos and weaver birds and giant pelicans. We also saw members of the Weyto tribe (an ethnically different group that supports itself through fishing) out in their papyrus canoes called tankwa. 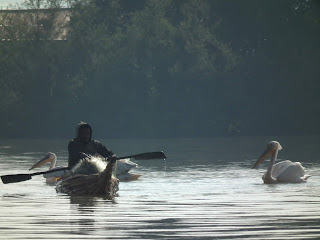 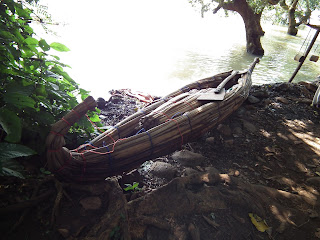 We visited the Azwa Maryam monastery on the Zage Peninsula. Founded in the 1310s by Abuna Yohannes it's a circular church with a thatched roof and modern paintings adorning the inside. 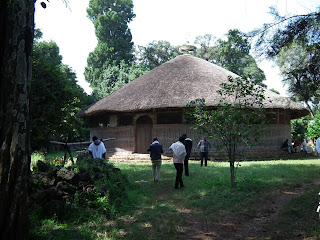 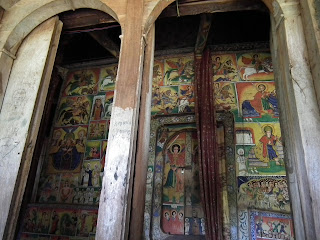 I love all the paintings of demons and the Last Judgement. With the Jesuit influence of the 16th C Ethiopian art adapted some Western designs, but so much remains original (including some Bible stories not included elsewhere, like Christ turning clay birds real as a child). While the cross is an important symbol, the crucifix - the implement of Christ's death - wasn't really portrayed until the Jesuits came. The cross is still seen more as a healing implement, like Moses's staff raised to heal the people of Israel in the desert. As with Catholic art, there is a lot of symbolism. Figures seen straight on with two eyes are generally good, while if they're seen from the side, with one eye, it means they're evil. 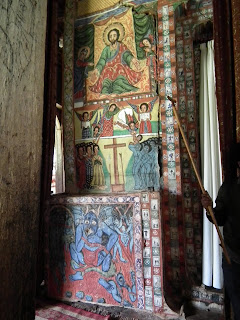 Email ThisBlogThis!Share to TwitterShare to FacebookShare to Pinterest
Posted by Jessica Strider at 14:46