Ethiopia has a large number of ethnicities, each of which have their own languages. The country's official language is Amharic, the written form of which is derived from Sabean script. There is no official romanized (that is 'English') transliteration for words, so the city I'm talking about is written in English as both Axum (used by the first sources I read so it's the form I use) and Aksum (what Google maps and newer sources use).

The end of the Damot Dynasty and Yeha came via the rise of the Axumite Empire. Axum, its capital city, is one of the oldest continually inhabited places in Africa. Locals believe it was the Queen of Sheba's capital in the 10th C BCE. Historians acknowledge it was established from at least 400 BCE. In the 1st century CE Greek merchants knew of the powerful capital and its main Red Sea trading port at Adulis (in what is now Eritrea). At its height, the Axumite Empire ruled what is now Northern Ethiopia, Eritrea, parts of South Sudan, and parts of Yemen across the Red Sea. They minted coinage with Greek writing (the lingua franca of the world at that time), and traded as far as the Byzantine Empire and India. For close to 1000 years they dominated the sea traffic between Africa and Asia. Their influence ended suddenly and the kingdom decreased in power for a variety of reasons: the rise of Islam and the Arab conquering of Adulis, cutting them off from sea trade and local deforestation and reduced crop yields due to over farming, being two of them.

From around the 3rd to 4th centuries CE elaborate burial markers were carved for nobility. These obelisks or stela were carved to look like buildings, with a door and several floors of windows. The number of storeys the stela have indicates the number of burial chambers underneath. There are several fields of stelae in and around Axum, the most notable one having very finely carved statues. 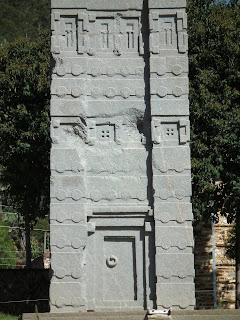 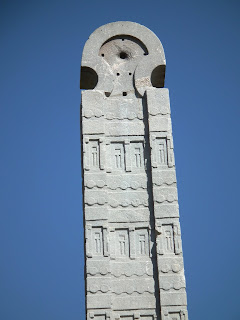 On the right in the picture below, being held up by metal cords, is stela 3, called King Ezana's stela. It is 23.5m tall, 160 tonnes, and 10 storeys. It is the only stela that's never fallen down (the others were raised again in recent times). The tall middle one is #2, the Roman stela because the Italians carried it off to Rome during World War II and only recently returned it. It is 24.6m tall, 170 tonnes, and 11 storeys. The one on the left in pieces on the ground is the Great Stela, Stela 1. It is 33m, 520 tonnes, and 13 storeys. It is believed to be the largest single block of stone attempted to be erected. It's believed it fell and broke when they tried to lift it. It was the last stela carved and erected at this site. 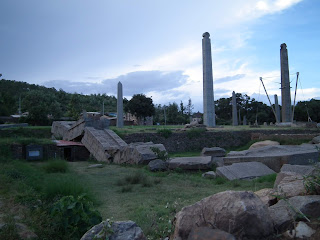 Some of the stela have what might have been sacrificial altars at their base. The circular depressions may have been used to hold blood or incense for ceremonies. The belief is these were pre-Christian burial markers as a few of the stela have semi-circular carvings that may have held metal crescent plates, to mark them for the moon god. 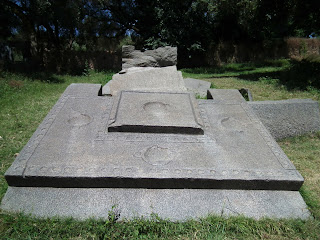 A few of the tombs underneath have been excavated. The mausoleum had several tombs on either side of a long corridor. 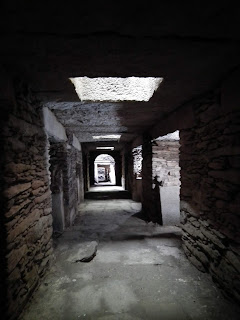 The tomb of the false door was uncovered by accident when soil erosion allowed some of the stone to peek out. At the front of the photo below you can see a measuring block used to cut stones to size so they would fit together without mortar. 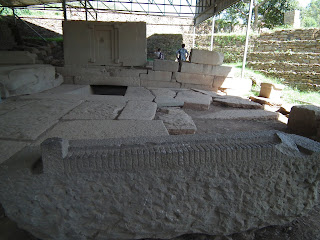 Because they minted coins, and because those coins have been recovered, historians have a firm grasp of some of their royal lineage. We know that Ezana was king of Axum from the 320s to 360 CE. We also know that during his reign he went from being a moon god worshipper, using the crescent moon on his coins, to being Christian, and using a cross. Rufinus, continuing the history of the Christian church that Eusebius wrote, tells that as a boy the Christian Frumentius and a friend were captured by Axumites and put to work in the palace. They converted Ezana who later let them leave. Frumentius went to Alexandria and asked the Patriarch there to assign a bishop to go to Axum and preach the gospel. The Patriarch decided there was no one better prepared for the task and ordained Frumentius, who became the first Bishop of Ethiopia. The church museum also has several stone tablets with inscriptions from this period, one of which begins with "In the faith of God and the power of the Father, son and Holy Spirit, who saved for me the kingdom, by the faith of his son Jesus Christ, who helped me and will always help me, I Azanas king of the Aksumites... " (A Comprehensive Guide to Aksum and Yeha by Gian Paolo Chiara, 2014  page 134). So there is no doubt regarding the king's conversion.

We also know some of King Ezana's exploits due to another stone inscription that was found by some farmers a while back. Written in Greek, Sabean, and Ge'ez, it talks about a battle the king won and his spoils of war. 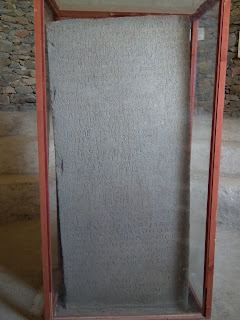 A later dynasty that will be discussed with Gondar, utilized the people's religious beliefs and complied the Kebra Nagast (Glory of Kings, translated into English and available for free here) which basically acts as a royal origin story. It teaches that the Queen of Sheba (or Saba) was the Ethiopian Queen Makeda. Hearing of his great wisdom she visited King Solomon in Jerusalem and bore his son, Menelik I. While there's no archaeological basis for this story, many Ethiopian's today believe their royal lineage descends from King Solomon and the Queen of Sheba. (Some more fanciful stories in the country state that the Queen was the daughter of a dragon or simply cursed with a hairy body or club foot and that she was healed of these afflictions when she went to see King Solomon.)

This is why one ancient palace ruin in Axum, Dundur, is considered by some to be the Queen of Sheba's palace. 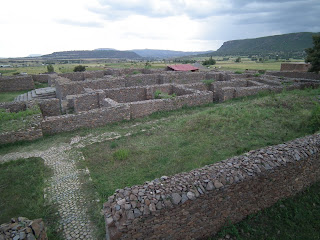 It's also why many believe that this chapel at the heart of the church complex in Axum houses the Ark of the Covenants. After visiting his father, Menelik I stole the ark from the temple, realizing that Solomon was becoming corrupted, and that it has been in Ethiopia ever since. There are several stories of the ark being hidden in various places in the country over the years during times of tribulation. But its main home has been Axum. Every consecrated church in Ethiopia has a replica of the ark - the stone tablets containing the 10 commandments. These are only seen by priests, but are paraded during festivals. 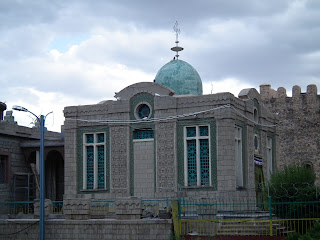 For the first seven days of each Ethiopian month (they don't use the Gregorian calendar) there is the Mehelela Procession around the church complex with the ark replica. It traces the path Menelik I took when he originally brought the ark to the city. It starts at the giant tree near the church entrance, goes to the central square, and then loops back around to the church. The priests cover the ark and parade it under an umbrella. Following it are first the men, then the women, dressed in white, holding lit candles. It's an amazing sight and an incredible experience to walk with them. Back at the church there is a sermon and the ark is returned to the church. 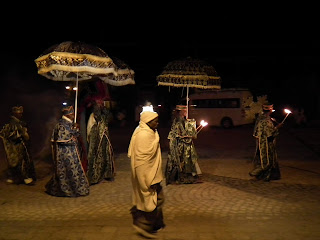 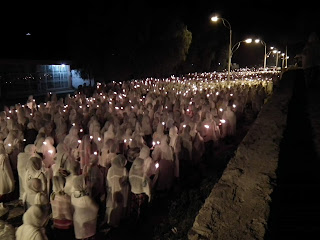 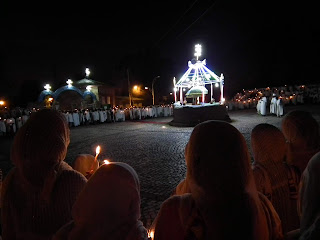 Some also believe that the Ethiopian king at the time of Christ's birth was Bazen, and that his tomb is in Axum. Also called Balthazar, there's another belief that he was one of the three kings who visited Christ as a child, bringing frankincense, an incense still produced in Ethiopia. 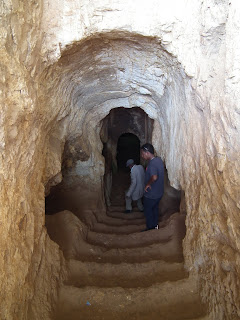 Axum is an amazing city with so much historical and mythological importance. Only a few tombs have been excavated and most there's a lot of archaeological work that needs to be done here.
Email ThisBlogThis!Share to TwitterShare to FacebookShare to Pinterest
Posted by Jessica Strider at 20:42