The oldest civilization there are records for that inhabited what is now Ethiopia is known as DMT or Damot. They originally came from Southern Arabia and intermarried with the local population. They wrote in a Sabean script, which has no vowels, from with Ge'ez, the liturgical language of the Ethiopian Tewahedo Orthodox church derives, which was in turn modified to create the Amharic and Tigrigna written languages. Their capital was at Yeha, about an hour East of Aksum, and their kingdom lasted from roughly the 8th Century BCE to about 150 BCE when they were conquered by the Axumite Empire.

Two major sites remain at Yeha, the great Temple of Almaqah, a S. Arabian moon god, and the ruins of what may have been a palace (due to its size). The temple fared better and is still mostly standing, likely due to a 6th C saint who Christianized the site and built a church either next to or inside the temple. (Sorry. We were there in the morning so my photos from this angle are all backlit. Here you can see a stela - grave marker with what might have been an altar base - in front of the Temple.) 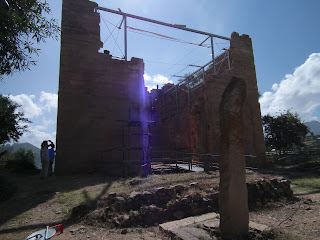 While a few of the temple stones were repurposed (most notably the two ibex carved stones that adorn the modern church) it prevented stones from the entire building from being used in local construction. Ibex were used as sacrificial animals. 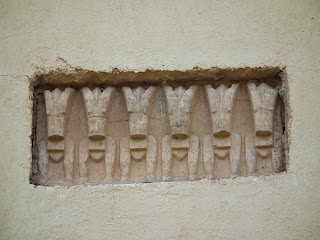 The temple itself is (according to the books I read about it) 18.6 m x 15 m x 13 (or more) meters tall. It was made up of large, finely dressed blocks of silicified sandstone, up to 3m squared interlocked without mortar. It is similar to Southern Arabian temples of the 7th Century BCE, and contained an inscription to their moon god. The building was likely originally two storeys tall with the interior of the temple was split into 5 aisles by rows of pillars. The side aisles would have been roofed, while the central aisle was left open to the sky.

Entered from the West, the East end was divided into three rooms: the rightmost being a small bath or cleansing pool, the centre being where the altar sat, and the left being for storage. 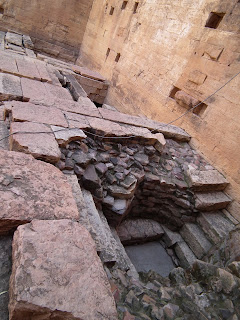 There are fragments of the drainage system in the floor leading out the right side (South) wall. 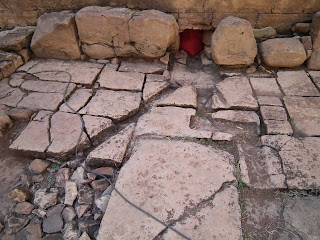 The treasury here had several inscription fragments and a few stone incense burners with crescent moon shapes carved into them. (Note: The Davison carving on the bottom left is modern.) 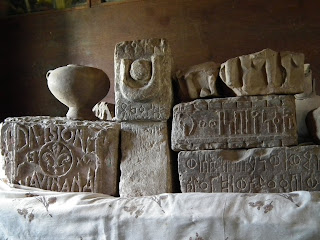 A similar Ethio-Sabean temple was found much more recently near the village of Meqaber Gaewa, near Wukro (whose museum houses the original finds). There they found a fully intact and remarkably well preserved libation altar. Notice the ox head used as a spout. Next to the inner spout at the top was a slightly lowered stone where the sacrificial animal's head would have been set. 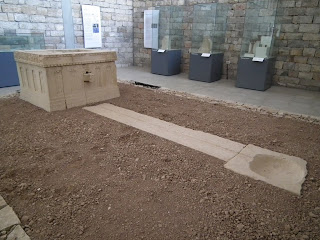 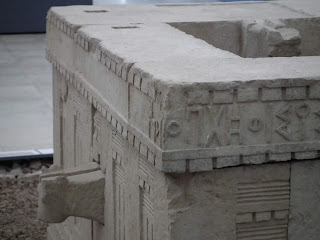 Around this time I started noticing the oxen we passed on the streets had significantly larger horns. Like HUGE horns. Huge, crescent moon shaped horns. 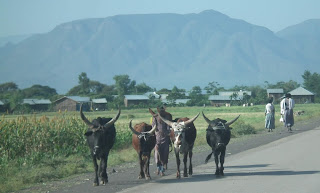 Later, back in Addis Ababa, we saw some of the Yeha artefacts at the National Museum, including this statue of a seated woman and several incense burners. The inscription on the statue reads, "for he (god) grants a child to yamanat". [Sounds to me like the statue was a gift from a wealthy woman who became pregnant after prayers/sacrifices were held here on her behalf.] They also had some bronze identity marks, used to brand cattle, located in graves. This one identifies animals belonging to "MATS". 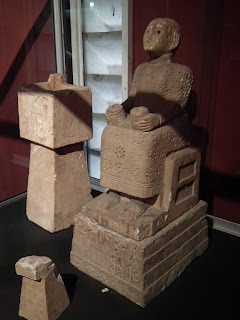 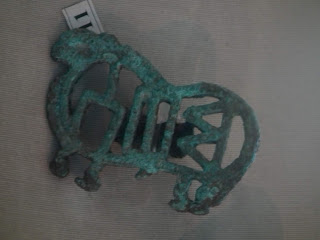 Email ThisBlogThis!Share to TwitterShare to FacebookShare to Pinterest
Posted by Jessica Strider at 10:56