Tigray is in the Northern highland region of Ethiopia.

I mentioned in yesterday's post that the Axumite King Ezana converted to Christianity in the mid 300s. At that time when the ruler converted the nation was considered to have converted with them. The reality is that only the royal family and important nobility likely converted at this time. In the 4th - 5th century CE there was a schism in the Christian church over the nature of Christ. The Ethiopian Tweahedo church believes Christ had a single nature that was perfectly human and divine, and are called miaphysites. This belief was shared by the Egyptian Coptic church, Armenian Apostolic Church and the Syriac Orthodox Church of Antioch (I'm using their modern names here). Meanwhile, what came to be known as the Catholic and East Orthodox churches believed Christ had two natures, divine through His father, and human thanks to Mary. Called dyphysites they persecuted the miaphysites and tried to end what they saw as heresy.

To escape persecution some holy men fled Syria in the 6th century and started monasteries in the Axumite Empire. These nine saints are credited with the spread of Christianity to the people. Several monasteries in use today credit one of these saints with their founding.

One of the Saints, Aregawi, is said to have been lifted up the side of a cliff by a snake so he could found the monastery at Debre Damo. As it's a working monastery women aren't allowed, so we didn't go there. Today, people access it by climbing up a rope. The saint is depicted in paintings being lifted up in the snake's coils. Here's an image of him from the Azwa Maryam church at Lake Tana. 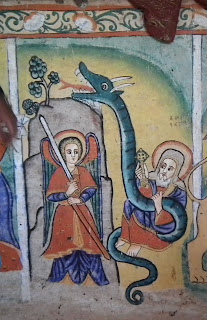 There is a cluster of three churches within easy walking distance of each other, which we got to see. The first of these is Medhane Alem Kesho. Dated from the 10th to the 12th centuries, depending on the book, it is carved from a 15m high cliff. To get there you have to walk up this rather steep stone shelf with the 'hoofprints of St George's horse' imbedded in the stone. 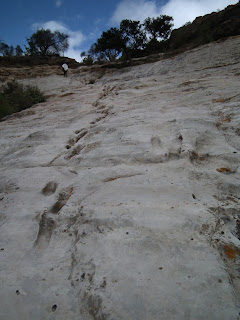 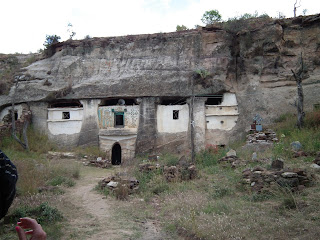 Axumite building techniques alternated stone layers with wood, creating a distinctive look that carried on after their decline. You'll see a good example of this in tomorrow's post on Ymrehanna Kristos church. Wooden posts were used at doorways and windows. The ends sticking out were called 'monkey heads' and are replicated in stone at a lot of the rock-hewn churches in the area. Many of them also have 'blind windows' (ie, carved windows that aren't functional) as friezes (carved decorations) around the nave (central aisle of the church). 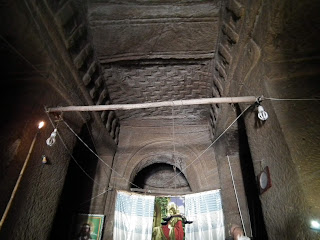 While this church has no paintings (aside from the modern ones on the outside) it does have a carved ceiling. Each section has a somewhat different design. 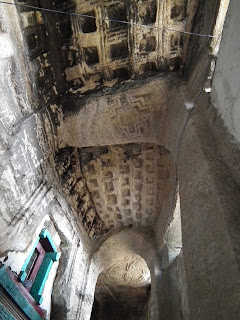 The church had a very old and rather cool locking mechanism. Here you can see the priest locking the door with one stick, and then unlocking it from the outside using a second stick on a string.

We then walked through a small valley and up another hillside to find Mikael Melehayzenghi church. Each of these churches have a small gate demarcating the compound. Inside the wall is generally a small cemetery for the priests and locals. 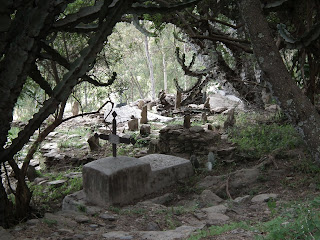 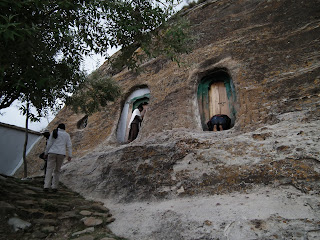 The church is 8.5m x 7m, with a carved dome 3m high. The dome is meant to look like a local loaf of bread called 'himbasha'. It's called "The Stamp of God". It also has an Axumite frieze around 3 sides of the main church. It has some beautiful modern paintings as well. 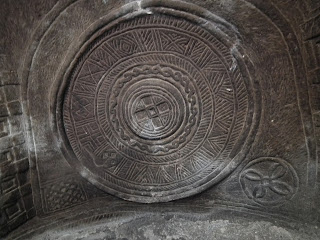 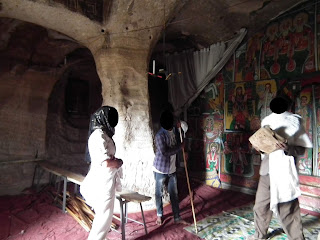 The third church in this cluster is Petros Paulos and getting to it is an adventure. A new church was consecrated at the base of the cliff in the 1980s where services are now held. The upper church is no longer consecrated. You have to climb not one but 2 ladders (some of the nails had come out of the steps! so it wasn't the safest) divided by a short stone section that wasn't easy to get on/off of with my short legs. (The church is the white structure in the upper picture.) 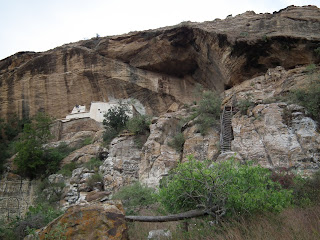 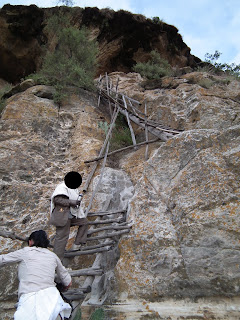 The top has a gorgeous view. There's a small unadorned antechamber and then the small, fully painted church. 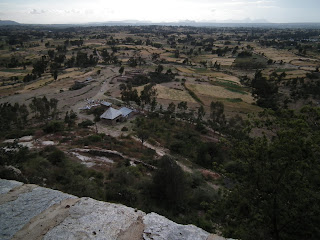 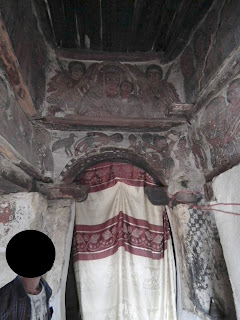 There's an unusual crucifixion scene that does not contain a cross. Crosses are seen in Ethiopia as implements of hope and healing (using the staff raised by Moses to heal the Israelites as their model). Crucifixes are rare and entered the visual arts with the coming of the Jesuits in the 1500s. 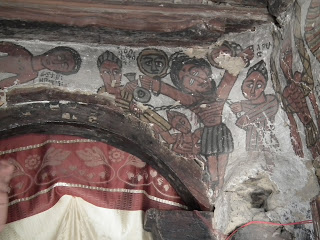 The next day we were able visit Abreha Atsbeha, a church dedicated to King Ezana and his twin brother Saizana (I believe Abreha and Atsbeha are their baptismal names as Ezana and Saizana do not appear on the religious list of Kings, despite the archaeological evidence of their reigns). It was the day before a festival here, so I wasn't able to photograph the entire church (the narthex, where most of the paintings are, was restricted to priests only). 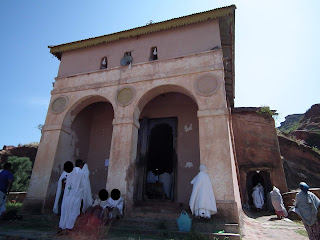 Carved from sandstone with wooden windows and door frames, it is 16m wide, 13m deep, and 6m high. The construction date of the church is considered to be between the 8th and 10th centuries. In the 10th century the Agaw Queen Gudit (or Judith?) attacked and burned it. Her conquering the region is another reason for the decline of the Axumite Empire. 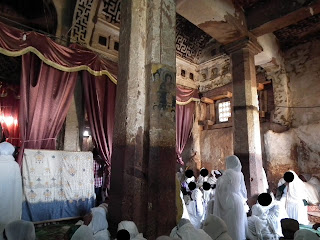 Email ThisBlogThis!Share to TwitterShare to FacebookShare to Pinterest
Posted by Jessica Strider at 11:58