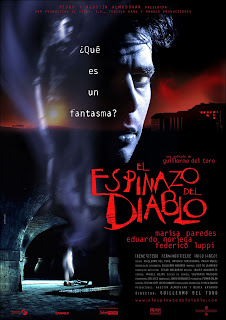 After Carlos’s father is killed in the Spanish civil war he’s dropped off at a boy’s orphanage where a child recently died. Carlos starts seeing a ghost as he learns more about the Republican sympathizers who run the place and the volatile caretaker the kids are afraid of.

This is a great atmospheric horror story. It’s slow paced, giving you time to get to know the principle characters. Carlos is a great protagonist, curious and sweet, bullied a bit by one of the older boys.

The ghost effects are subdued but very creepy. They’re kept to a minimum so you never get used to seeing it. There are no jump scares and minimal gore.

There’s very little explanation of what’s happening outside the orphanage. They mention a war but you really have to piece things together to know what war (if you didn’t read it on the case). I’d have liked a bit more information.

On the whole this is a good, creepy film.


Email ThisBlogThis!Share to TwitterShare to FacebookShare to Pinterest
Posted by Jessica Strider at 12:36