If you're a fan of young adult urban fantasy and want to see more novels made into graphic novels, than Sea Lion Books is a publisher to keep an eye on.  In addition to F. Paul Wilson's teen Repairman Jack prequels, they're doing graphic novel versions of Becca Fitzpatrick's Hush Hush and Richelle Mead's Dark Swan series.

Hush, Hush is the story of Nora Grey, a studious sixteen-year-old girl from Coldwater, Maine. It has been a year since her father's murder and she is not interested in much other than her schoolwork. Then she meets Patch, a bad boy—and fallen angel. Though unwisely attracted to him, Nora finds herself caught in a battle between the fallen and the immortal. Choosing the wrong side could cost Nora her life.

Richelle Mead's Storm Born, which features "a freelance shaman who battles the ghosts and fey that sneak into our world from the Otherworld" is already in production and will be available May 18th. 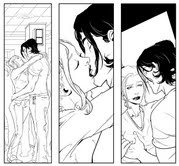 Email ThisBlogThis!Share to TwitterShare to FacebookShare to Pinterest
Posted by Jessica Strider at 10:39