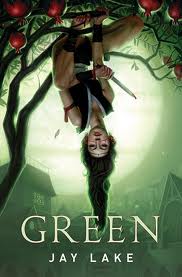 Green was bought from her father at a very young age and raised in another country to be a nobleman's wife. Trained to numerous arts: cooking, sewing, music and more, it's her dance lessons and the illicit classes of stealth, falling and climbing, and the mistress who teaches them, that offer her a taste of the freedom and choice she longs for. When the time comes for her to leave her training courtyard, she makes a choice that shows her that while you can choose your actions it is their consequences that decide your future.

The world building is fantastic, with the people of different continents having different skin tones, languages, cultures, food preferences, sexual preferences, etc.. The history was loosely done though I got the impression that this was because Green didn't know much of it and therefore it would have been out of place to add more, rather than because the author hadn't considered this aspect of his novel.

This is a book that will appeal to readers who enjoy character driven action like that of Robin Hobb's Farseer trilogy and Piers Anthony's A Quest for Chameleon. And like the latter, the almost aimless wanderings and life of the protagonist have purpose, when seen from the end (though to a lesser extent than Quest).

The problem I have with character driven stories is that, as with real life, not everything that happens to a person is interesting. Plot driven stories typically skip over these periods quickly, but character driven stories can't, leading to pacing issues where some periods are fascinating (like Green's two periods of schooling), action packed (her time as an aspirant and the ending), and times that are boring (her return home). Indeed, Green has an almost anti-climax half way through the book, after which the protagonist wanders for some time.

While she's a mostly sympathetic character, as a child taken from her father, her inability to grow up and realize that, despite the circumstances of her youth, she was better off in her new home than her old one, annoyed me. Despite constant observations to the contrary she held to her mistaken belief that everyone else in the world got to choose their futures while only she had to face misfortune and a loss of freedom. She held to these beliefs even after she left her court prison and found that her own choices had trapped her. That being able to make decisions for her life wasn't the same as being free. She was someone who held to an ideal that didn't exist and refused to move on. She made uninformed decisions and wondered afterward why those decisions were wrong.

Ultimately, Green is an interesting protagonist but not interesting enough to hold attention for an entire novel.
Email ThisBlogThis!Share to TwitterShare to FacebookShare to Pinterest
Posted by Jessica Strider at 11:36