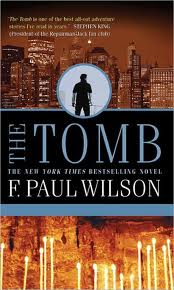 Jack fixes things.  For a price.  He has two new jobs, but neither one is his usual work.

The first job is for an Indian diplomat, Kusum, who needs Jack to find a stolen necklace and repay the mugger who took it for hospitalizing his grandmother.

The second job is equally impossible in New York.  Find an old woman who disappeared from her home.  Despite having no real detective skills, he agrees to help because the missing woman is the aunt by marriage of his ex-girlfriend, Gia.  A girlfriend who didn't like learning what Jack really did for a living.  A girlfriend Jack would dearly love to get back together with.

The Tomb is a smoothly written multiple mystery.  The two plots converge in a myriad of ways, creating a tight story.  Mr. Wilson makes good use of flashbacks to flesh out characters and explain aspects of the plot.  The pacing is good, ramping up the tension on one hand and giving downtime and tender moments on the other.

I particularly loved the emotional intensity of the characters, specifically Jack.  When he remembers Gia's look of horror upon discovering his cache of weapons you can feel his despair at ever convincing her of his honour.  And when she asks him to say away from her daughter... his reaction is visceral and comes across keenly.  And when supernatural terrors enter the story, you can feel Jack's terror at having to face these monsters.

It's a fantastic book.

Note: The version of The Tomb that I read is the Author's Definitive Edition.  I'm not sure how much has been changed or added, beyond the technological upgrade.  It's the second book of the Adversary Cycle, but was rewritten when he made Repairman Jack into its own series, of which this is the first book.
Email ThisBlogThis!Share to TwitterShare to FacebookShare to Pinterest
Posted by Jessica Strider at 10:51