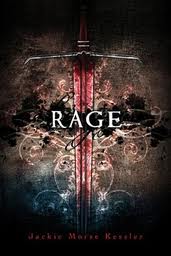 Cons: ending seemed too simplistic given the problems the protagonist faced

For Parents: minor sexual content and descriptions of self-inflicting wounds

Melissa Miller is a cutter.  It's the only way she can deal with the emotions surrounding her.  She knows others wouldn't understand.  Her ex-boyfriend called her a freak when he saw her scars, and broke up with her.

Even so, she doesn't take it well when the personification of Death arrives with a package and tells her her blade's going to slip.  Death knows the worst is yet to come for Missy and he's chosen her as the new incarnation of WAR.

Though this book is better written than the first of the series, Hunger, in terms of characterization and details, I found myself unable to properly understand Missy's reasoning for cutting herself.  She was entirely sympathetic as a protagonist and yet, while without being anorexic I could relate to Lisabeth Lewis, I had a harder time relating to Missy's way of dealing with her problems.  I imagine this will not be as much of an issue for most teens (who are deep in the trials of high school), whether they're at risk or not.

I also felt the message here overshadowed the story more than in Hunger.

I found the ending problematic.  Things got wrapped up too quickly for me to feel that the character was honestly going to change how she dealt with things, learn to trust others and become a strong woman in control of herself and her life.  I imagine cutting yourself for psychological reasons takes a fair bit of time and effort to overcome.  With her parents continuing their neglect of her and the few weeks of intense pressure at school due to the incident that causes her blade to slip, I can't see her rehabilitating as quickly as the ending seems to suggest.

On the other hand, the protagonist does start to deal with her problems and learns that she can't overcome some things by herself.  She learns there are time when you must trust friends and learns to believe in herself.  In addition to this, it has a good message for youth and adults alike, and treats a difficult issue that's relatively ignored when it comes to fiction.
Email ThisBlogThis!Share to TwitterShare to FacebookShare to Pinterest
Posted by Jessica Strider at 10:34