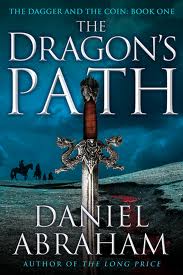 Cons: while I liked the characters, I didn't quite feel for them

War is coming to the free city of Vanai.  But the people aren't worried.  Every few years the Kings of Antea throw their weight around before leaving the city to its own devices again.  Still, the branch of the Medean bank doesn't want the whole of its holdings to potentially fall to the invading army, so the bank's ward, Cithrin, is disguised as a boy and set to carting the gems, silks and other precious items to the branch in Carse.

The caravan's guards are 'drafted' into the army, so their captain must find a new team, or he, too, will find himself fighting.  He convinces a group of actors that their fortunes are better off outside the city.

Meanwhile, marching towards Vanai is Geder Palliako, butt of his fellow nobles' jokes and admirer of essays about the fall of the Dragon Empire.  He's unaware that he's about to become the pawn of powerful men.

And back home in Antea's capital, Dawson tries to keep the farmers from gaining a council and weed out his political rivals, whose actions are becoming more and more treasonous.  If only the king would listen to him and grow a backbone.

This book has so many good things going for it.  The writing is solid - enough background and description to give a sense of place and time but not enough to become boring.  Fantastic worldbuilding - with geographical diversity, history and a unique set of races sure to please readers of Adrian Tchaikovsky's Shadows of the Apt fans.  I especially liked how people from one place knew next to nothing about other areas of their world, and relied on hearsay and stories for what they did know.  And unlike Col Buchanan's Farlander, where the conflict is strictly along regional and national lines, here there's also (unfortunately) realistic racism among the 13 varieties of humans.

The protagonists are all interesting and make decisions that are often surprising though entirely in character.  Unfortunately I never went that last step towards feeling what the characters feel.  I didn't rage with Dawson or despair with Cithrin.

The political intrigue isn't as brutal as that in The Adamantine Palace (by Stephen Deas), but the players are much more likable here and what intrigue there is, is well played.

I expect to see this book up for awards and on many 'best of' lists for 2011
Email ThisBlogThis!Share to TwitterShare to FacebookShare to Pinterest
Posted by Jessica Strider at 11:36