What's the book about?, you ask.  Here's the cover blurb: 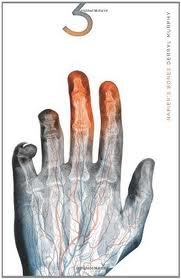 What if, in a world where mathematics could be magic, the thing you desired most was also trying to kill you? Dom is a numerate, someone able to see and control numbers and use them as a form of magic. While seeking a mathematical item of immense power that has only been whispered about, it all goes south for Dom, and he finds himself on the run across three countries on two continents, with two unlikely companions in tow and a numerate of unfathomable strength hot on his tail. Along the way are giant creatures of stone and earth, statues come alive, numerical wonders cast over hundreds of years, and the very real possibility that he won''t make it out of this alive. And both of his companions have secrets so deep that even they aren't aware of them, and one of those secrets could make for a seismic shift in how Dom and all other numerates see and interact with the world.

And now that you know if you're interested, here are the contest details from their press release:

Launched April 4, the date of John Napier's death in 1617, the contest is looking for creative works related to John Napier's interests, which include mathematics, the occult and alchemy. Winners will receive a limited hardcover for the best “undiscovered” invention by John Napier, a trade paperback for an original short story where numbers play some role in the plot, and an eBook for the best numbers-based joke.

"Derryl's novel presents a world where numbers are the basis of magic," explains co-publisher Sandra Kasturi. "It's such an unusual take on magic that we wanted to run a truly unique contest where people can have some creative fun and enter in different ways. I can’t wait to see what kind of cool stories and wacky fake ‘inventions’ people come up with, not to mention all the terrible jokes!"

Full details are on the ChiZine Publications website at http://chizinepub.com. Entries must be received by May 4.

Email ThisBlogThis!Share to TwitterShare to FacebookShare to Pinterest
Posted by Jessica Strider at 10:47

Thanks for posting this, Jessica. Were you at Ad Astra? (Only a few days later and already my mind is failing.) I did get to your store with Brett's help and signed your stock, and was very impressed with the selection.

No, I wasn't able to make Ad Astra this year, but I did see the 'signed by author stickers' on your books at work. Thanks :) Signed books always appeal.