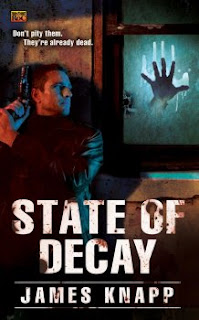 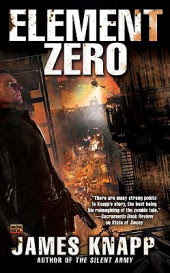 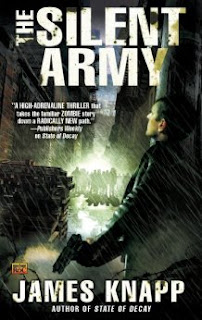 I've been running this blog for several years and have never done a book giveaway.  That changes today.  In order to celebrate the release of his third book, James Knapp, author of the fantastic Revivors series, is giving away three copies of... the book of your choice.  That's right.  If you've never read his stuff, here's your chance to get book one: State of Decay.  If you have started, you can continue with book two, The Silent Army or get the newest, Element Zero.  Each book will be autographed by him and the contest is open to everyone, everywhere.

The cover copy for State of Decay:

Would you allow the military to reanimate your corpse, knowing it would commit atrocities, if it meant avoiding service in a brutal war during your lifetime?

What if your level of citizenship depended on your answer? To gain a chance at a better life, or feed your family, which would you choose then? Or would you choose neither, and accept a life of hardship and poverty?

What if you came face to face with your own death, and realized too late you had made the wrong decision?

Nico Wachalowski is a war veteran. That makes him a first-tier citizen. Formerly a police detective, he has reintegrated into civilian life as an agent in the FBI. During his time in the war, he encountered the reanimated soldiers known as ‘revivors’ many times. When they begin to turn up inside the city, he is tapped for his expertise in a field he’d rather leave behind.

Faye Dasalia is a police detective. She and Nico worked together long ago, but while he decided to serve, she opted to be wired for reanimation. That makes her a second-tier citizen. In the course of investigating a string of murders, she stumbles on a situation that brings her face to face with the revivors she will one day become herself.

Calliope Flax refused to serve. She also refused to be wired for reanimation. That makes her a third-tier citizen. As a result, she ekes a living in a housing project which has been mostly abandoned. Highly taxed, and with few rights, she seems to be on a path of self-destruction until circumstance drops her in the middle of the biggest terrorist plot the country has ever known.

Zoe Ott is a third-tier citizen as well, but unlike Calliope, she was born with a gift. Zoe can manipulate the thoughts of others. This ability allows her to live above the poverty line, but just barely. The gift also comes at a price; she is constantly assaulted with visions from both the past and future, with no way of knowing which is which. In the depths of late-stage alcoholism, she has long since stopped trying to make sense of it all when a particularly persistent vision prompts her to contact Nico just as events begin to unfold.

The four are drawn together by circumstances which at first seem unrelated. By the time they realize their fates are connected to a fifth, unseen enemy, that enemy has nearly gathered the power to strike a blow that has the potential to change everything, forever.

All you need to do for your chance to win is *** leave a comment on this post saying which of Mr. Knapp's book you'd be interested in (by title or number).

*** Email me at: jstrider@confuseacat.org with the name or number of the book you're interested in.

It has occurred to me that differentiating between commentors of the same name and identifying the winners may not be as easy as I supposed via comments, hence my shift to email.  (If you have already left a comment, please email me as well so I can be sure to have your contact information.)

The author will be haunting the comments section, so if you have any questions about the books or the writing life leave him a message.

Tuesday April 19th, around 11 AM (Eastern Daylight Time), I'll draw three names from the emails, at which point I'll ask the winners to email me their addresses so Mr. Knapp can send them their autographed books.
Email ThisBlogThis!Share to TwitterShare to FacebookShare to Pinterest
Posted by Jessica Strider at 11:23

Thanks a bunch Jessica - I'll be lurking about too so feel free to toss out any questions you might have!

james, i was wondering how long you've been publishing? and out of curiosity, what did you study in school?

@patty - My first time published was in 1999 for a non-fiction work (it was this big, doorstop tech book) but State of Decay was my first published fiction novel. Before that I managed to get one short story published in Barbaric Yawp, and so my first officially published work of fiction turned out to be titled 'I Suck'.

In school I actually wrote for the stage, something I honestly haven't done since then.

Nice blog. I enjoyed the review of Sucker Punch, looking forward to seeing this movie that so many feel so strongly about---in a positive and negative way. I like winning too, and would start with State of Decay, of course!

I'd be most interested in getting a copy of "State of Decay"! :)

One of the joys of doing something for the first time is making mistakes. I've discovered that it will be difficult contacting the winners by using comments, so please email me at jstrider@confuseacat.org instead.

Sorry for the inconvenience.

@ Joe, Thanks. Sucker Punch is just one of those films that pushes people's buttons. It seems to be a hate it or love it movie.

I would love State of decay

Joe, if you're following this, you need to email me at jstrider@confuseacat.org and send me your mailing address. If I don't hear from you by tonight (Friday, April 22) your prize will be given to the runner up, whose name I pulled when I did the draw.