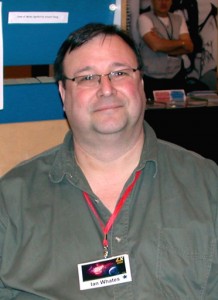 Mr. Whates has also edited numerous anthologies and written several short stories and essays.  A full listing of his works can be found here.

> What can readers expect from your City of a Hundred Rows series? 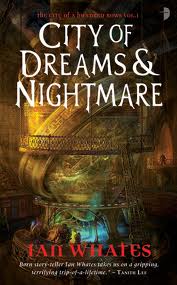 A lot of excitement, character development, betrayal, surprises and adventure, I hope, all set in a unique fantastical-urban environment.  I'm very conscious that the city of Thaiburley is a significant character in its own right, so in the second book we learn more about the city and its inhabitants, as the Prime Master attempts to combat bone flu - a deadly malady that threatens the city's Heights - and Kat forms an uneasy alliance with her sister and leads the Tattooed Men through the dark streets of the City Below to hunt down the Soul Thief, the monster that killed their mother and consigned them to the gladiatorial hellhole known as the Pits.  However, I also want to show that there's a world outside the city's walls, so we follow the street-nick Tom and the assassin Dewar as they embark on a perilous journey to find the source of the river Thair.  In the third book everything comes to a head.  We learn the secrets of Thaiburley's origins and the fate of the various characters, and discover whether the city is destined to survive or fall.
> You're currently writing a fantasy series and a science fiction series.  How do you keep them straight and how do you find time to write two series at once?
To date this has worked really smoothly.  I've written the novels alternately, so have been able to swap from one universe to the other, keeping both fresh.  The 'constant' throughout this has been provided by my own independent publisher, NewCon Press, which I established five years ago.  With this year's releases I'll have published 21 titles, mostly anthologies, all edited by myself, featuring original stories from many of the UK's top genre names (and a few from beyond), including Neil Gaiman, Kelley Armstrong, Brian Aldiss, Christopher Priest, Alastair Reynolds, Charles Stross, Tanith Lee, Gwyneth Jones, Stephen Baxter, Neal Asher etc.  I've also given debuts to a fabulous array of new writers, which I'm proud of, featuring their work alongside that of the 'big names'.
> Which genre do you this is harder to write, fantasy or science fiction?
To be honest, neither.  As a reader I've always considered myself primarily a science fiction fan who also likes fantasy, but when it comes to writing I'm happy to tackle both with equal relish.  I think the City books actually straddle the genres, and would describe them as 'urban fantasy with steampunk overtones and SF underpinning'.
> What made you want to be a writer?
The thrill of reading; simple as that.  Ever since my early teens I've soaked up as much SF and fantasy as I could, by far too many authors to attempt listing, and always wanted to have a go at producing my own stories and novels.  I loved the imagination, invention and sheer excitement which, for me, only genre fiction can provide.
> What was the first novel (published or unpublished) that you wrote and how long did it take to write it?
I wrote a short novel some two decades ago that never saw the light.  I honestly can't recall how long that took me.  The first 'real' novel I wrote was City of Dreams and Nightmare, which took about 8 months.

> What was the hardest scene for you to write?
That's an interesting question.  No particular scene stands out as being any more difficult than another.  If I come to a point where the words don't automatically flow, I tend to jump ahead and write an imminent scene, letting my subconscious work on the earlier one before coming back to it.  I think battle scenes require a bit of extra care, as it's always a challenge knowing how much detail to include and how much to leave to the readers' imagination.
> What is your university degree in and does it help with your writing?
I don't have one, so no, it hasn't helped a bit.  I always had a penchant for writing at school, winning the Lord Mayor's Prize for English (open to all the schools in London) when I was 13 or 14 and being presented with the prize by the mayor himself at Mansion House, so I think the education I received at school certainly helped, but from school I went straight out to work.
> When and where do you write?
At home in the dining room, which has become my office.  I know some writers who retreat to cafés and pubs to escape distraction, and I'm tempted to try that, but to date this has worked okay.  As for when, all the time, interspersed with editing (in addition to two anthologies for my own NewCon Press, I'm currently working on one for Solaris plus a new Mammoth title for Constable and Robinson/Running Press), and dealing with matters relating to the British Science Fiction Association (BSFA), which I've chaired for the past three years.  I tend to start work early - anywhere between 6.00 and 7.30 am - and finish at around 6.30 in the evening.  Weekends I'm soft on myself and generally only put in four or five hours each day.
> What's the best/worst thing about writing?
The best is seeing the ideas that have formed in your head take shape on the page, and then to receive an email from a reader or to come across a review/blog that enthusiastically endorses your work.  To know that you've managed to articulate those ideas and characters with sufficient skill to entertain others and bring them a little pleasure, however ephemeral, is a real buzz.  The worst…?  I'm not sure.  No one likes bad reviews but they're inevitable - nothing you write is ever going to appeal to everyone… Writing can be hard work, but it's work that I love… I suppose the biggest downer is the lack of a regular income.   That can be an issue, but hardly an unexpected one.
> What is something you didn't know about the publishing industry before you had your first book published?
The honest answer is that I've yet to discover it.  I suppose having around forty short stories published in various venues prior to my first novel, and having run my own publishing business for four years before my first two came out in early 2010, I had a fair idea of what I was getting into.  Not to say something won't rear up and surprise me tomorrow. > Do you have any advice for hopeful authors?
Loads… some of which might even be worthwhile.  Read lots.  Join a writers group (either local or online - I did both).  Not only is comment on your own work by those without a vested interest (ie not family and friends) invaluable, but you learn an awful lot by critiquing your peers.  It's amazing how often you'll spot a repeated failing in someone else's work and realise, 'hey, I do that!'  Go to conventions.  Meet the authors, editors and agents.  Writing can be a lonely business, but it doesn't have to be, not entirely.
> Any tips against writers block?
Sorry, not really, I've never suffered from it.  I think if I did, I'd simply move on to something else and come back to the problematic piece later.
> How do you discipline yourself to write?
Probably not as well as I should.  If this ever becomes a serious issue, I might resort to going to a pub or coffee shop to write as mentioned above.  As things stand, I write in bursts throughout the day, interspersed with editing, sorting out covers and layout for books, dealing with emails, going on forums etc.  I have a very loose word count target for a given day, but don't beat myself up if I fail to get there.
> How many rejection letters did you get for your first novel or story?
I spent a year and a half writing short stories before I turned to novels, and was constantly submitting them - as soon as a rejection arrived that piece would be sent out to another market.  Initially, I was getting one sale every ten or eleven submissions, which had narrowed to one in three or four by the time I turned my attention to novel writing.  In the process, I made enough 'professional' sales to qualify for SFWA membership and saw two of my stories shortlisted for BSFA Awards.
With novels it was a little different.  I showed the first six chapters of City of Dreams and Nightmare to Solaris when that was all I had to show.  They eventually turned the book down, saying that it didn't fit their 'core product needs', but added that they loved my writing and invited me to pitch them a space opera (the first time, apparently, they'd ever done this).  I duly wrote a synopsis and opening chapter, which I submitted, and this led to them commissioning me to write the Noise books.  In the meantime, City of Dreams and Nightmare secured me an agent and a publishing contract with Angry Robot.
Email ThisBlogThis!Share to TwitterShare to FacebookShare to Pinterest
Posted by Jessica Strider at 09:56