Last year I did a few DIY miniature diorama kits. They came with all the bits and pieces you needed to make a little scene. I enjoyed doing them but wanted to do something bigger of my own design. I wanted to do an alchemy laboratory. I started researching images online (and there are some amazing artists out there). In August I bought the wood for the box frame and got to work.

I worked fairly slowly as I've never done anything like this before and didn't want to make any major mistakes by going to quickly. When it came to the main box a lot of steps had to be done in a certain order. 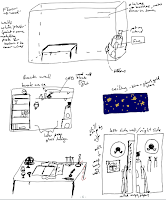 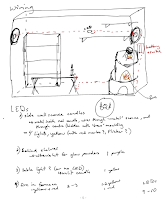 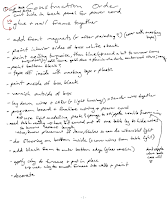 I don't own a table saw so I had the store where I bought the wood do the major cuts for me ($1/cut). I nailed and glued the boards together and tried to get them as square as possible as they dried. I painted the inside top a mixture of turquoise and blue and then added some bits of glow in the dark flakes and some heat embossed glow in the dark constellations. I added the owl that hangs from the ceiling as I figured it would be harder to put in once the back was on. It was wrapped up so as to not damage itself/the box. 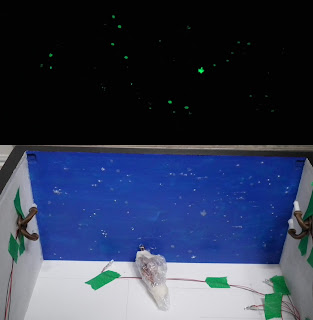 I carved grooves in the other walls for the wires to slot into. I decided to use magnets to hold the glass cover on, so I needed grooves for those to sit. I glued the back panel on (with a cut out door so I could access the electrics) and then painted the interior walls white, except where the corner furnace went, and the floor brown. I then painted the entire outside black and varnished everything. 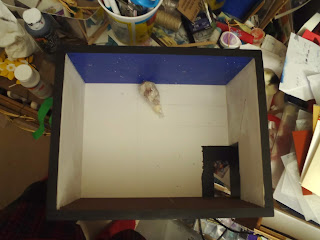 The next step was adding the wiring for the lights, as the flooring and clay I wanted on the walls were going to cover them. I ran the wires, and added the light fixtures (3D extrusion printed by my husband) and my husband soldered them to the control board. We added a button to change between the different lighting modes he programmed for me. There are 5 candles (2 for each wall sconce and one for the table), a red and yellow light for the furnace, and 3 ultraviolet lights (one above the bookcase, and one for each of the wall shelves). 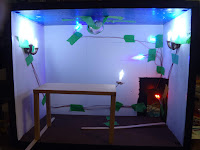 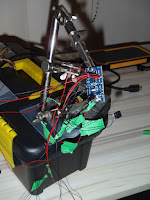 I used long thin wooden sticks for the flooring, and gave it a coffee stain to make it look more lived in. 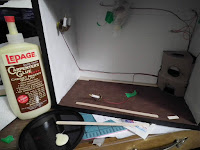 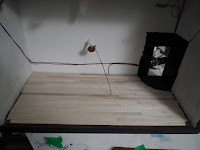 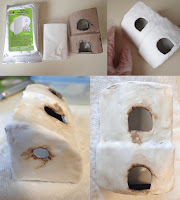 The furnace was made out of cardboard, with 2 wooden support beams inside. There's a strip of lantern paper, meant to soften the effect of the red and yellow LEDs that will mimic the fire. I covered the outside with clay and glued it into the box.

I added a black strip of felt to the bottom front for the glass to sit on and glued in the magnets. I finished the back panel, using a magnet to hold it closed. The furnace hides all of the electrics. The USB power cord plugs into the board (which is glued to the opening panel) and comes out the back of the box through a hole that's been covered with felt. The button is glued to the outside.

I used a glass panel from a picture frame and glued metal book protectors to the corners to act as the dust protector on the front.

The next major step was adding clay to the walls. When doing the side walls I smoothed the clay around the wall sconces and then glued those down. For the back wall, I had to mark out where the bookcase and shelves would go and leave space for them. I glued the 3D printed L brackets that would hold the shelves right away so they would be glued into the wall instead of the clay, and not be covered. I added some coffee wash to the clay around the walls (especially above where the candles go). 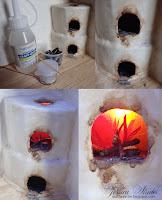 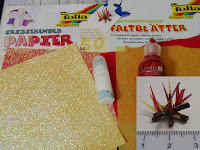 I added some real ashes around the furnace. I'd made a miniature fire using some twigs and iridescent paper, which I glued in place.

I had already made a bookcase using white masonite and a cardboard backing and then painted.  With the bookcase and shelves glued in, the box itself was finished. 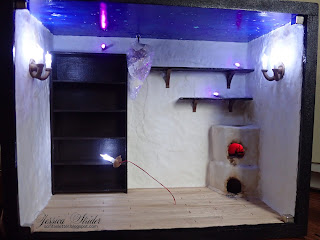 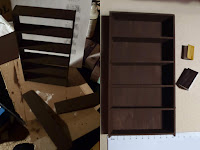 Part 2 shows some of the items I made to decorate the laboratory and part 3 has the finished diorama. I've set up an online photo album with a mostly step-by-step explanation of how I made everything.
Email ThisBlogThis!Share to TwitterShare to FacebookShare to Pinterest
Posted by Jessica Strider at 11:26