For Christmas last year I got a crystal growing kit by National Geographic. A few months ago I started making crystals and I'm really impressed with this set. 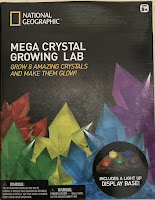 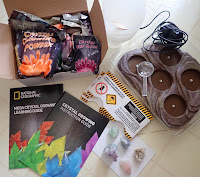 The kit I got had 10 different coloured seed crystals and crystal packets, 4 silicon containers for growing the crystals, a booklet about crystal formation in nature, and a few real crystals/gemstones. I bought a stainless steel bowl I could use as a double boiler to heat the water and crystals (so I wouldn't ruin a cooking bowl). My first batch was pink and dark green (colours I didn't care about if I messed up somewhere). 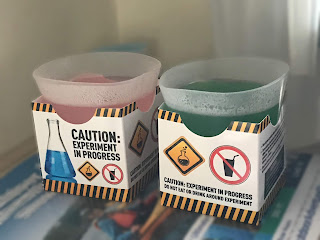 I let them grow for a little longer than the 10 days because I wanted larger crystals. Getting the rounded seed crystal out was harder than I expected. I eventually learned that the crystal formations at the base are smaller and softer, and it's easier to just break off that layer entirely than to try and gently pry the seed out. You still have the upper large crystals. I also learned to not wash off the crystals, as it just removes the colour.

I kept all the leftover crystal bits and actually grew several crystals from each packet (one large display crystal plus a few smaller flat layer crystals for future craft uses.

The display base has LED lights (hence why you need to remove the seed crystal, which is rounded (so the finished crystals can hide the LED inside and because it's opaque). I modified the stand by rubbing some gelatos (sort of a cross between crayons and pastels) so it would look a bit more natural and less plastic. 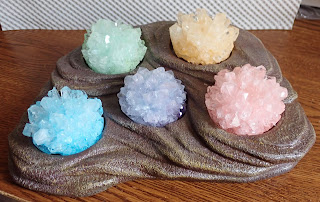 And here they are all lit up (plus a few of the 'spares'). 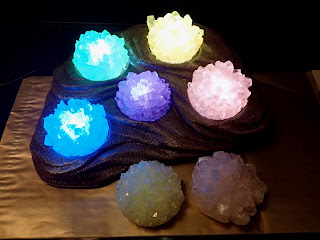 Email ThisBlogThis!Share to TwitterShare to FacebookShare to Pinterest
Posted by Jessica Strider at 11:34