This book is pretty complicated so I’m using the synopsis from the book instead of trying to come up with my own: 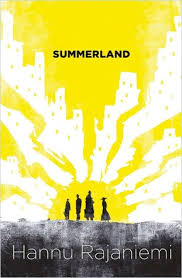 Loss is a thing of the past. Murder is obsolete. Death is just the beginning.

In 1938, death is no longer feared but exploited. Since the discovery of the afterlife, the British Empire has extended its reach into Summerland, a metropolis for the recently deceased.

Yet Britain isn't the only contender for power in this life and the next. The Soviets have spies in Summerland, and the technology to build their own god.

When SIS agent Rachel White gets a lead on one of the Soviet moles, blowing the whistle puts her hard-earned career at risk. The spy has friends in high places, and she will have to go rogue to bring him in.

But how do you catch a man who's already dead?


Pay very close attention to the first few chapters of the book as you’re dumped into the action with no background information beyond what you can gleam from conversations. Once you’ve got a feel for the players, the world, and the stakes, sit back and enjoy the fast paced ride.

The story is told through mostly alternating chapters from the points of view of Rachel White and Peter Bloom. Note that their timelines don’t match up right away (his story starts a few days after hers). I was impressed at the amount of background detail you eventually learn about the pair, and how that makes you care about them, even while they’re making choices that are hard to sympathize with. I especially liked the difficult relationship Rachel has with her husband. It was great seeing a married woman as a protagonist that took into account the prejudices she faced as well as the sacrifices she made to reach her position.

The worldbuilding is well done and takes into consideration how the discovery of a literal afterlife affects the living. Summerland itself is a little hard to picture (understandably as it’s got a 4th dimension that isn’t time) but adheres to a particular set of rules. I would have liked more information on how the ectotanks and flyers worked, because they sounded terrifyingly awesome.

This is a unique spy thriller that’s worth picking up.

Email ThisBlogThis!Share to TwitterShare to FacebookShare to Pinterest
Posted by Jessica Strider at 10:19